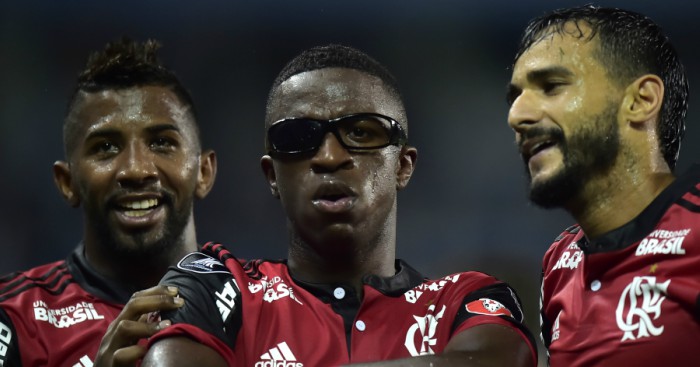 It may have been a disappointing week for Chelsea and Manchester United, but there has still been plenty of football which we have enjoyed.

With the second leg of Champions League and Europa League knockout ties being played, there have been a number of tense, fraught fixtures.

And we’ve rounded up some of our favourite moments from the week in football, from as far afield as Mexico and Brazil.

So much time for this kind of thing.

Lazio boss Simone Inzaghi, like his brother Pippo, doesn't celebrate with anything less than 100%

Even if he puts himself in danger by doing so 😂 pic.twitter.com/RKEKHbI8Mj

A no-look header to win football tennis. Not bad from the Leicester City goalkeeper.

Watching a Roma player do beautiful things in that kit is always nice.

You know that child who Real Madrid have already paid €45million to sign? He scored twice for Flamengo this week. He really puts getting sacked by Next at 17 into some perspective.

After having a dig at local rivals Nottingham Forest at the weekend, Derby boss Rowett is now set to change his name by deed poll to Bantonio Banderas.

Fresh from mugging off the whole of Nottingham, Gary Rowett banters his own boss and is now officially my hero pic.twitter.com/HBUGMt9Plg

The result means he has now won 51 of his last 55 fixtures as a manager in all competitions. We reckon that’s pretty good.

Kylian Mbappe may have been the match winner with a brace as PSG beat Angers 2-1, but what about this pass from Draxler for the France international’s first? Woof.

Not as good on Twitter as Crouchy, though, is he?

The CONCACAF Champions League is always good for brilliant moments, and Lopez’s goal as Chivas beat Seattle 3-0 to qualify for the semi-finals was no different.