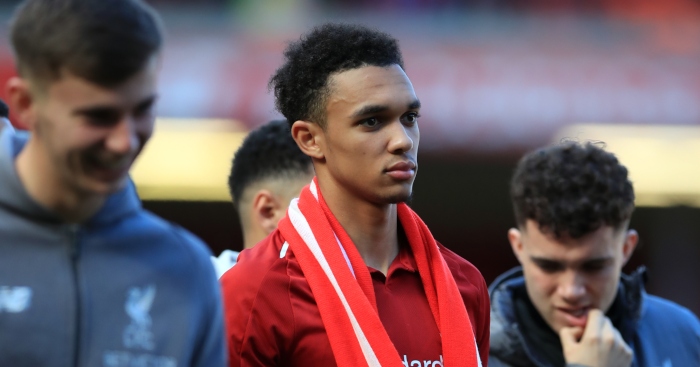 The Premier League winners were finally decided this weekend as Manchester City edged out Liverpool on the final day of a remarkable title race.

Elsewhere, Tottenham secured Champions League football for next season and there were a number of stunning goals around the world.

Deep down, we all want to be Trent Alexander-Arnold.

Trent Alexander-Arnold is still playing out on the pitch, currently putting crosses in for his mates at the Anfield Rd end. #LFC #LFCWOL pic.twitter.com/CbeCn5jxjO

Imagine getting to celebrate your team winning the title by having the whole squad recite one of your songs back at you.

An anthem for the Champions!

Two months away from turning 38, Joaquin is still doing things like this – in the 97th minute – for Real Betis. What a man.

A 97th minute rocket to win the game for Real Betis 🚀 pic.twitter.com/F6YyvL18HT

We’re not fans of Seattle Sounders after what happened last year, but fair f*cks for this.

Spurs fan Ella was subjected to online abuse after a video of her dancing at Tottenham’s new ground went viral, but she was all smiles as she got to be the team’s mascot against Everton and meet one of her heroes.

Griezmann rocked up to Atletico Madrid’s clash with Sevilla on Sunday wearing a Diego Godin shirt ahead of the defender’s last home game with the club.

Imagine what a goal this would have been…

If at first you don’t succeed, you should try and try again.

Sound of the summer.

🎶 Cos all of the spies have faded away,
Try not to worry , you’ll beat us some day
We beat you at home and we beat you away
Stop crying Frank Lampard.

As there were a few other rather bigger games taking place, you might not have seen this…