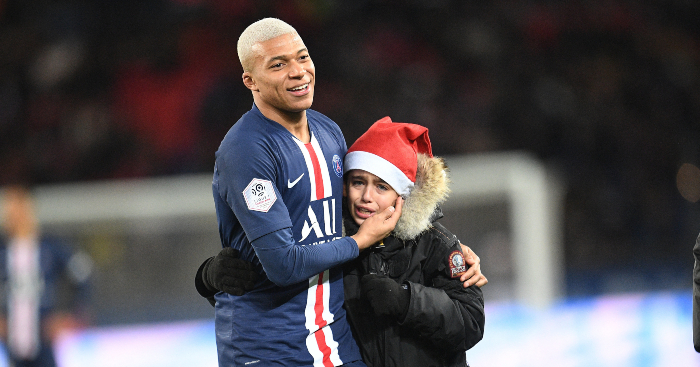 On the weekend Liverpool were crowned the best club side in the world, Chelsea and Tottenham played out an absorbing encounter in the Premier League’s headline fixture.

Elsewhere, Kylian Mbappe turned it on with a striking new haircut and Romelu Lukaku continues to take Serie A by storm.

Just try to stop him.

From defence to attack in ten seconds 🔥

Kylian Mbappé finishes off a rapid PSG counter-attack with a BEAUTIFUL finish!

And he’s a nice man too.

Mo Salah gently removing the cups from the table so that they don’t spill when it gets a bit raucous is why I would die for the man pic.twitter.com/fEVzDfCnWG

Just try to stop him.

Perfect buildup between Candreva and Vecino and Lukaku with an immaculate finish.

One of the best goals of the season.

Not a bad afternoon for the striker, including an excellent gesture for his young team-mate.

SELFLESS, CLASS ACT | Romelu Lukaku got two goals and an assist in Inter Milan’s 4-0 win over Genoa on Saturday.

Inter’s designated spot-kick taker also stepped aside when they won a penalty to allow 17-year-old Sebastiano Esposito to score his first goal for the club. 👊🏾 pic.twitter.com/QxpaGQHoCB

Anyone else noticed Batshuayi has his nails painted #Chelsea #spurs pic.twitter.com/NvOtRes6vo

An absolute fluke, but still.

A special memento for one Everton fan.

Duncan Ferguson was there when Everton needed him, a real connection between him and this club. pic.twitter.com/ekEVXZqlNP

Robertson tells Mane he’ll get revenge on Flamengo man; lives up to his word

Watch: Fans chant ‘Arsenal Fan TV, Get Out Of Our Club’ at Goodison Park