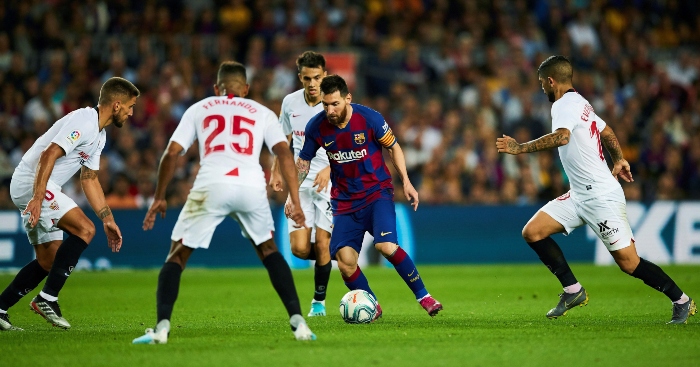 Lionel Messi has been at it again for Barcelona, while Liverpool enjoyed a perfect couple of days of piss-boiling in the Premier League this weekend.

Thanks to a 95th-minute winner against Leicester City and Manchester City’s home defeat to Wolves, Liverpool are now eight points clear at the top of the table.

We’ve rounded up the best of the action on and off the pitch around the world, starting with some more magic from Barcelona.

We said Suarez scored the sexiest goal of the week after his strike against Inter in the Champions League. We were wrong.

😮 LUIS SUAREZ WITH THE ACROBATICS!

Suarez has some competition though.

Axel Witsel with the goal of the day 😳pic.twitter.com/iW2qcIh6P7

👏 A PERFECT FREE KICK FROM MESSI!

🔵🔴 Barca putting on a clinic against Sevilla, and it's now 4-0! pic.twitter.com/xfy4y92AM3

A nice way to move top of the table.

95th-minute penalty to win the game followed by this celebration. The GOAT.

Anyone know where you might be able to get a lifesize cardboard of this?

Asking for a mate. pic.twitter.com/oU5bMErFxg

The surprise shithouse of the week – beating Andy Robertson (not literally). Sadio Mane’s reaction to Milner’s penalty is also lovely.

Breaking MLS’s record for goals in a single season with a stylish 34th.

He’s a good lad, is Marten.

What a win in front of the new Curva! (Haven’t got photos yet but since I have a dinner tonight I have to post something now) pic.twitter.com/MGw4ENaBFG

Beating Celtic is a big deal, to be fair.

Our weekly installment of hilarity from the Polish Ekstraklasa.

We’ve all been to plenty of games where this would have been the highlight.

I’d still rather share a stadium with an active railroad than a major league baseball team pic.twitter.com/gNwz4VUmDg

A heart-warming start to the week.