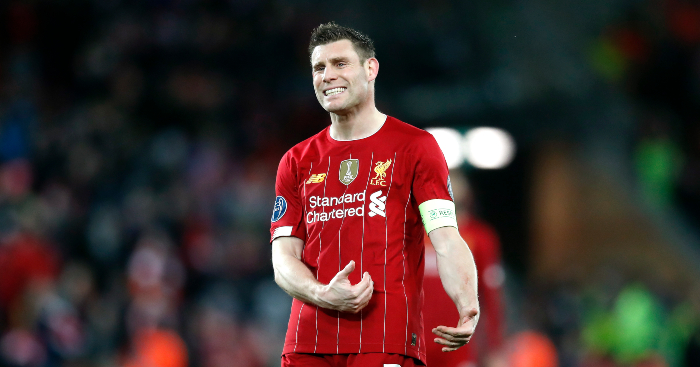 We are delighted to announce some actual football took place this weekend.

From brawls in the Copa Libertadores to Ronaldinho bringing joga bonito to a Paraguayan prison, think of this feature as a nicotine patch to distract you from the massive cravings.

Being so good with both feet is no fluke.

Evolution of Mason Greenwood so far 💫

Some actual football, and a very, very hard shot.

The sequel to Mean Machine is going to be excellent.

🇧🇷 The first picture of Ronaldinho playing football in a Paraguayan jail has been released. I still can't believe it. His team won the game 11-2. Ronaldinho scored 5 goals & assisted 6.

Your dad is getting incredibly angry about this.

It’s hard to separate Boring James Milner and the real one.

An unbelievable moment as Curtis Good somehow prevents the ball from crossing the line!#MCYvWSW #ALeague pic.twitter.com/1qlNywFwBw

Nope, we had no idea he’s playing for Wellington Phoenix either.

Crazy scenes in the #Libertadores match between Gremio and Internacional as a huge fight broke out! 🤯🤯🤯pic.twitter.com/Ff83hiVsKO

So, after a player already told the story to the press of what happened one day in 2018 and many people asked me if it’s true, there we go. Many times for many years after training, I stay a little bit longer to take some penalties. I always made little bets with the goalkeepers to put a bit of spice into the challenge. For some reason, I never really missed one. So one day i got too confident and it got a of out of hand. It was Willy Caballero’s turn and I told him that if he saved it I’d get him a Range Rover. Unfortunately for me, he saved it in front of the whole team so you can imagine how it went… I went from feeling the most confident, to feeling the most stupid guy on earth 😅. Everybody obviously was shouting and laughing that I had to pay my debt. I went to a scrapyard and I found a destroyed Range Rover that couldn’t be used at all for £950 so I said, you know what? I’ll get that. The next day they brought it to the training ground and well… I’ll show you the rest on a video. The lesson of the story is: Don’t bet at all at any cost. @willycaba

You should definitely listen to this.