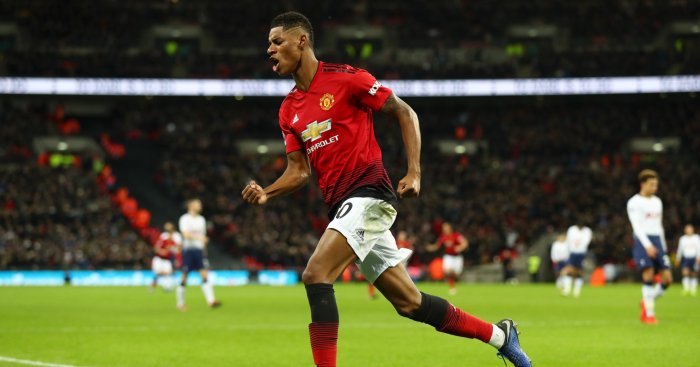 As far as a standard January weekend in football goes, this was pretty fun.

That pass, and that finish. Oh, they’re good.

That pass from Pogba tho'!!! 🔥
That finish from Rashford!! 💥#MUFC pic.twitter.com/sfwj6mKPe6

Eleven saves to keep Spurs out, the most he has made in a Premier League match without conceding. And while your dad is still arguing that all the shots were too close to the goalkeeper, Ben Foster puts him right.

I see a lot of people saying all De Gea saves were straight at him, please factor in that the guy has some mad sense to know where to be at just the right time, you can’t teach that. Proper goally 👏

We’re not saying Rob has completely fallen in love with Marcelo Bielsa, but his tattoo of the Leeds United manager is looking pretty good right now.

👀 A suspicious man is reported at Derby’s Training Ground.

😳 Marcelo Bielsa admits he sent a man to spy on training.

Williams last goal at San Memes came in 2016. Then he did this.

What do they say about buses? Very fast, goalscoring buses?

The 18-year-old made his Bayern Munich debut and caught the eye with this wonderful nutmeg.

Just the 400 La Liga goals for Messi now, more than 29 clubs have scored in their entire history.

*listens to Family Affair by Sly and the Family Stone*

No words are necessary.