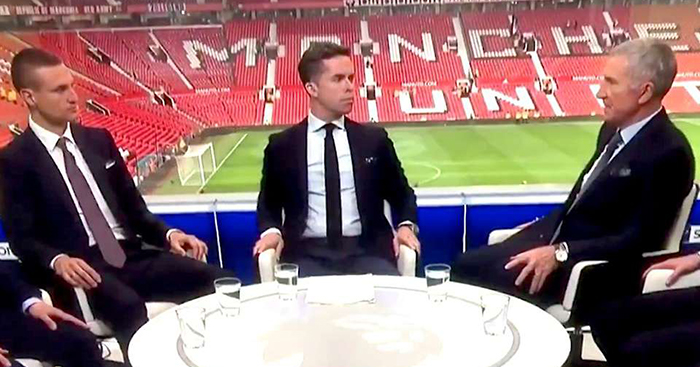 Graeme Souness is not afraid to make his feelings clear as a pundit on Sky Sports – and sometimes he doesn’t even need to speak to get his point across.

Souness told us he “never really liked” his hardman tag as a player, but it would be fair to say he wasn’t one to sit back and watch when he didn’t like what he was seeing around him on the pitch.

And absolutely nothing has changed since he moved to the studio…

Asked by David Jones whether he thought Liverpool had played well in their 0-0 draw at Manchester United, Souness was complimenting the visitors when he spotted Jones’ face.

Jones has actually become something of an expert at dodging Souness’ pointed questions. It comes with experience.

Watching Souness react to the comments of Jamie Redknapp has become something of a spectator sport in itself.

Their arguments over Paul Pogba are particularly fun – and this was a sensational zinger from Souness when suggesting the Man Utd midfielder should have been sent off against Tottenham.

“If the referee doesn’t see that as a foul, then he knows nothing about football either”.

Souness even managed to get annoyed by Redknapp when he drew Liverpool to face Chelsea in the semi-finals of the League Cup in 2014.

If looks could kill.

Souness has agreed with Redknapp at least once before in fairness, causing quite the stir in the studio when describing Pogba as “really good”.

To be fair to Souness, this was quite rude.

Graeme Souness is interrupted by Thierry Henry & Gary Neville, and so he plans their gruesome deaths…😂 pic.twitter.com/fq3zyqWhEe

We’re not entirely sure what annoyed Souness here: Simon Thomas suggesting Wayne Rooney could play in the US, Gary Neville’s reaction to the suggestion, or the fact that he wasn’t allowed to butt in.

Souness is not a fan of modern football terminology.

Souness certainly doesn’t reserve his disdain for presenters and pundits. He particularly enjoys laying into Arsenal – and unsurprisingly is not a fan of Mesut Ozil.

What did Mesut Ozil do to Graeme Souness? claims he doesn’t show real ‘passion’ 🙄 pic.twitter.com/Eauc6OO7sl

“Stay on your feet, you fool”.

Graeme Souness: I never really liked the tag I was given as a player