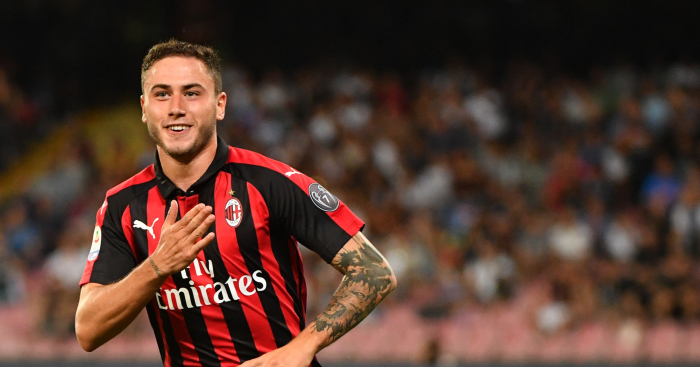 AC Milan, Borussia Dortmund and PSG youngsters have all made promising starts to the 2018-19 season from which they can now look to build upon.

While a host of big-money deals saw high profile names move across the continent, there are also a host of exciting prospects breaking into clubs’ first teams.

We’ve taken a closer look at 11 youngsters who have already started to emerge at their clubs this term.

Having reportedly rejected interest from Everton and Newcastle in the summer, Diakhaby instead decided to leave Lyon to join Valencia in a €15million switch.

The 21-year-old centre-back was tasked with breaking into an impressive Valencia defence which conceded the fourth fewest goals in La Liga last term.

And after appearing as a substitute in Los Che’s season opener, he has been promoted into the starting XI for the following two games.

Should Diakhaby continue to establish himself in Spain, he will put himself in contention to make the step up from France’s Under-21 squad to the senior side.

Still only 21, Calabria made his Milan debut three years ago, becoming increasingly involved with the first team in the intervening seasons.

Another player who has previously been linked with Everton, after being in and out of the Milan side last term, the full-back has started both of their opening Serie A fixtures, and even bagged himself a goal against Napoli.

There has been a fresh feel to Borussia Dortmund’s central defence this term. Marc Bartra left for Real Betis in January, while Sokratis departed for Arsenal in the summer and Omer Toprak is yet to appear this season.

In their place, Akanji, a January signing from Basel, and summer buy Diallo have formed a young partnership which has seen Dortmund concede just once in a resounding win over RB Leipzig and a draw with Hannover.

Having made the jump from Mainz to Dortmund, we’re willing to wager £50 that Diallo will be tenuously linked to follow in Jurgen Klopp’s footsteps and join Liverpool at some point over the next 18 months.

RB Leipzig have made a habit of signing and developing some of the best young players in the world in recent seasons, and Saracchi is among the latest crop to be given an opportunity to impress in Europe by the Bundesliga outfit.

A Uruguay youth international, the left-back left River Plate to move to Germany in the summer and has started both of Leipzig’s opening matches.

The 20-year-old is the first to admit he isn’t the most naturally talented footballer, telling Bundesliga’s official website: “I wasn’t very good when I started playing at the age of five, but I stuck at it and put in the effort to improve.

“The willingness to make sacrifices, put my foot down and work hard is one of the main reasons I became a footballer.

“There are many young footballers in Uruguay who are prepared to put so much in and work so hard to make it to the top this way, and they see this as an opportunity.

“That’s how doors suddenly open up and it gives you the hunger to make it to the top.”

A host of youngsters have been handed opportunities at PSG during the start of the season, with Thomas Tuchel using 21 players in all four Ligue 1 matches.

Despite having made just one senior appearance for the French outfit, N’Soki was subject to a £9million bid from Newcastle in the summer, rejecting a transfer as he did not want to rush a move to England.

That decision appears to be paying dividends, with N’Soki making three appearances at left-back and also providing two assists in the 4-0 victory over Monaco in the Super Cup.

Bernede, meanwhile, made his debut for the club in that win and has gone on to make two starts in midfield. Likewise, Dagba has started at both right-back and left-back since being handed his debut against Monaco.

Two names you may be more familiar with, Timothy Weah and reported Liverpool target Christopher Nkunku, have also been afforded first-team minutes as PSG have made an unsurprisingly convincing start to the season.

The Parisians are huge favourites to win Ligue 1, but if you fancy them to finally go all the way in the Champions League, it makes sense to use a football betting guide to ensure you’re getting the best bets.

Having made his Marseille debut as a 17-year-old, reports in 2017 suggested Kamara was attracting interest from the likes of Bayern Munich, Chelsea, Borussia Dortmund and Southampton.

Fourteen appearances followed in all competitions last term, and he impressed when starting Marseille’s opening 4-0 victory over Toulouse, although he had a tougher night in the following match against Rennes, getting hooked at half-time with his side 2-0 down.

Able to operate at centre-back and central midfield, the France youth international has since appeared as a substitute, and he is likely to earn plenty more first-team minutes this season.

I mean exactly that. Or even more. He can be world class ! He's been good in Marseille but totally amazing in this competition. Far far above the rest CB's here !

Much like RB Leipzig, Monaco have also been renowned in recent years for allowing young talent to flourish.

Mboula has already made headlines in his burgeoning career after leaving Barcelona to join Monaco last summer and, after making three appearances towards the end of 2017-18, he has already beaten that tally by playing four matches this term.

📝 @AS_Monaco announce the signing of Jordi Mboula from @FCBarcelona on a 5-year deal.

He's the guy that did this in the @UEFAYouthLeague… pic.twitter.com/RGsYXYR3GD

Future Huddersfield Town captain Terrier was signed by Lyon from Lille last January but was immediately loan back to Strasbourg, where he had impressed during the first half of the season.

The 21-year-old forward has now broken into Lyon’s first team, opening his account for his new club in a 2-0 victory over, of course, Strasbourg.

“All he does is right,” said Lyon head of recruitment Florian Maurice last year. “He is powerful, fast, very comfortable technically and very skillful in front of the goal.”