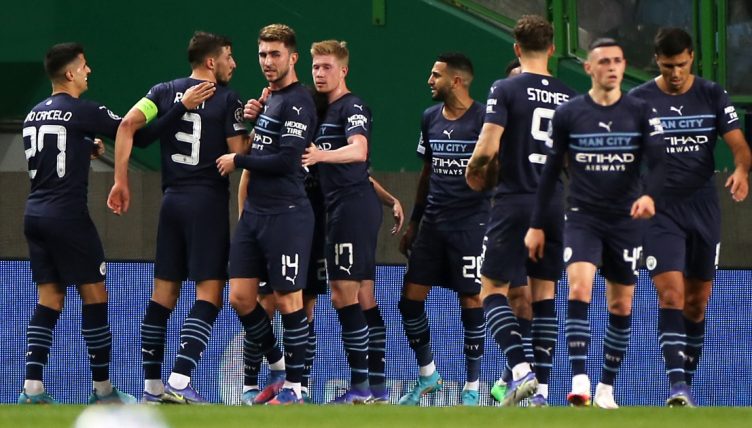 Manchester City produced a statement performance, reminding us why many consider them favourites to win the Champions League this season, with a stunning 5-0 thrashing of Sporting Clube de Portugal on Tuesday evening.

Some predicted that Portuguese champions Sporting would prove a stern test for Pep Guardiola’s men, but this proved not to be the case as they raced into a comfortable three-goal lead after barely half an hour in Lisbon.

From defence to attack, it was a complete performance from the Premier League leaders, all but booking their place in the quarter-finals and striking fear into the rest of Europe’s elite clubs.

“No [not a perfect performance],” famous perfectionist Guardiola told BT Sport after the match.

“Some players underperformed and we lost easy balls but we were so clinical.

“We saw in the first five or six minutes how good [Sporting] are. The difference between the two teams is not 5-0 but we were so clinical. We punished them.

“There is one rule in football when you have the ball and that’s not to lose it. We had some simple passes that we lost. Against the top sides in Europe we would be punished.

“It is a fantastic team. They are the champions of Portugal. They have incredible runners. They have a good team but I am very pleased because we make a big step towards the next round.”

If they weren’t at their very best in the 5-0 mauling of Sporting, the idea of City ever reaching Guardiola’s idea of perfection is a frightening prospect.

Here are 12 brilliant statistics to sum up how ridiculously good City were in their obliteration of Sporting.

– Man City are the first team in Champions League history to lead an away game by fouls goals at half-time in the knockout stages of the competition. It’s the 12th time that City have scored four or more first-half goals with Guardiola at the helm.

– Prior to their 5-0 mauling, Sporting had actually faced English opposition eight times in two-legged European knockout ties, winning all eight. It would take a miracle and a half for them to maintain that record this time around.

– The goal also takes Sterling into City’s all-time top 10 goalscorers, moving him ahead of Alec Herd, on 127 goals for the club in all competitions. He’s also one goal away from matching his goal tally from last season (14).

Sterling places his shot to perfection and Man City add a fifth! 😍

Wait for the replay angle from behind… 👌 pic.twitter.com/9YE9743NLG

– City have now reached 200 Champions League goals. They’ve become the 14th club to reach that milestone, but have done so in just 97 games – faster than any of the other 13 sides (via OPTA).

– Guardiola’s men overperformed their xG somewhat – scoring five goals from 2.5xG, underlining how clinical their forwards were – but they were outstanding defensively, giving up just 0.13xG against. Sporting barely had a sniff.

– Ederson didn’t make a single save. All three of Sporting’s shots were off-target. By contrast, City had 15 attempts, scoring with five of their six on target.

– Riyad Mahrez played four key passes (the final pass before a team-mate shoots at goal) – twice as many as Sporting managed collectively.

– Under Guardiola, City have scored five goals or more 43 times. That accounts for 13% of the games the Catalan coach has taken charge of (via City Xtra).

– They’re now up to 98 goals for the season in all competitions. Not bad for a side without any strikers. Unbeaten in their last 13 matches in all competitions (12 wins, one draw), City’s aggregate scoreline over that run reads: 42-7.