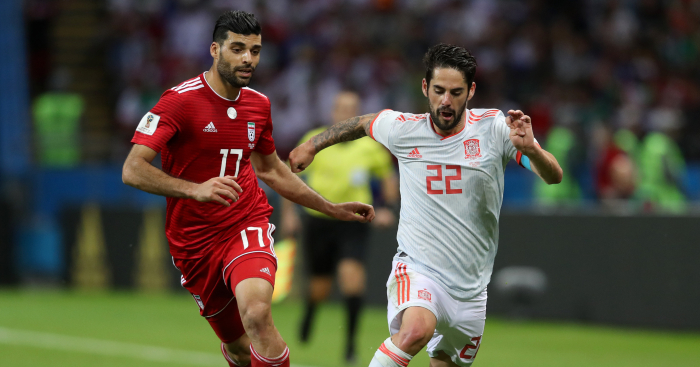 Former Manchester United and Arsenal heroes made us chuckle for their work in the ITV studios on day seven of the World Cup.

One week on from the opening match of the tournament, all three matches ended 1-0 as Portugal beat Morocco, Uruguay bested Saudi Arabia and Spain were victors against Iran.

We’ve rounded up the best of the action on and off the pitch in Russia.

There are seconds left, your team are 1-0 down in a World Cup game and you win a throw-in. Why wouldn’t you do this?

Literally the whole country of Iran: 20 seconds left, c’mon hurry up and throw in the ball

Iranian Player : Oh yeah, true true, but check out this flip tho pic.twitter.com/vlTofNZM2n

A wonderful footballer and good with animals. Form an orderly queue. We love it when animals invade the pitch.

England injury news:
Gareth Southgate dislocated right shoulder while running:
"The doc has made it clear that punching the air is not an option" #worldcup

Upon hearing the news about Gareth Southgate, Wright asked the question we were all thinking.

So much going on here.

Roy Keane reluctantly grinning at Ian Wright’s implication that Gareth Southgate was up to something in the woods when dislocated his shoulder. pic.twitter.com/644798xygi

Ian Wright: "what's he [Southgate] doing in the woods?" Even Keano liked that one!! 😂 #WorldCup18 #itv pic.twitter.com/yO8stiT85Y

Roy Keane is the sober guy at a party who is getting pretty fed up with his drunk mates. pic.twitter.com/xUqfUVgB4z

A good day’s work, you have to say.

A look back at Cristiano Ronaldo's day:

– 85th international goal, most by any player in European history
– 2nd player to score 4 goals at a #WorldCup after 33rd birthday
– 1st player w/ 4 goals through team’s 1st 2 games at World Cup since Miroslav Klose for Germany in 2002 pic.twitter.com/F1Ad9pAvW1

The Real Madrid midfielder did a good impression of how every Manchester United supporter has felt for the last couple of seasons.

He really is the shithouse’s shithouse.

Not wanting to have his title taken, Ramos proved he really is football’s ultimate bastard.

Doesn't matter if you are the referee Sergio Ramos is coming for you #IRASPA pic.twitter.com/q4QPWg9ljI

Wolves have got a very, very good goalkeeper.