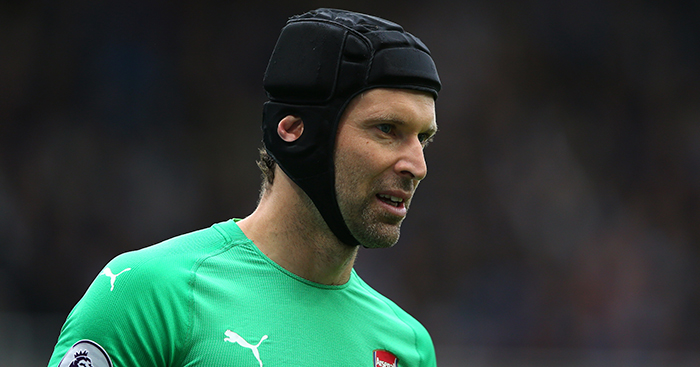 Some footballers clearly feel as though showing off their skills on the ball isn’t enough – so they look to music instead.

At some point or other, most of us have pondered the age-old question, would you rather be a famous footballer or famous musician?

Well, here are some lucky souls who, having already mastered one profession, got to show off their other ‘talent’, too.

Always a safe pair of hands, Cech has a hidden talent: playing the drums – and playing them very well, too, we might add.

The Arsenal keeper has his own YouTube channel, which sees him cover artists as diverse as Ed Sheeran, Linkin Park and Rihanna.

What more do you need in life?

When Alexis was seen apparently playing ‘Glory Glory Man Utd’ on the piano to confirm his transfer to Manchester United, lots of people doubted whether it was real.

But the Chilean is indeed an accomplished pianist and a few years earlier had played the keyboard in a video to raise money for the Arsenal Foundation before Christmas.

Cech was on the drums, of course, but the real star of the show in this wonderful piece of footage is Nacho Monreal…

There was a time where Martinez was one of the most sought-after strikers in the world, but in 2016 he left Atletico Madrid just six months after joining them to sign for Guangzhou Evergrande, for whom he made only 16 appearances in China.

Those transfers were worth €35million and €42million respectively, yet in September 2018 Martinez was loaned to Portuguese side Portimonense having been left out of Guangzhou’s squad for the Chinese Super League season.

Still, the fall from grace clearly hasn’t hit Martinez’s confidence too hard, as shortly after completing his loan move the 31-year-old announced the release of his debut rap album inspired by his religious beliefs.

The world was crying out for this. Hallelujah.

Just a few weeks after joining Brighton for a club-record £14million from PSV, Locadia was signed again – by record label Powerhouse Music.

The Netherlands international had already released two singles on his own label by then, and while his Premier League career has got off to a slow start, he continues to prosper musically.

Another player whose career has taken a nosedive, Jesé was still an up and coming star at Real Madrid when he formed a Spanish Reggaeton band with his friend DJ Nuno in 2014.

The following year he set out as a solo artist and under the name ‘Jey M’, released this song, Yo Sabia, which has now been played on YouTube over 30 million times.

He spent the 2017-18 season on loan at Stoke City from Paris Saint-Germain but was criticised for his lack of professionalism and commitment.

Gullit released his first song, ‘Not the Dancing Kind’, which made it to the top 10 in Holland’s music charts in 1984 while he was still at Feyenoord, but Captain Dread’s real hit came four years later.

By then playing for AC Milan and regarded as one of the best footballers in the world, Gullit teamed up with Dutch reggae group Revelation Time to release the anti-apartheid song ‘South Africa’, on which he played bass and contributed vocals.

It charted at number three in Holland.

Just like Gullit in the Netherlands, Gazza was so popular in England in 1990 that he could have a released a record of him farting and made it into the top 10

As it turns out, ‘Fog on the Tyne’ was actually remarkably catchy and still has you humming along at this mere mention of it nearly 30 years later.

It made its way to number two in the charts at the time.

Barnes features on not one but two memorable songs – albeit memorable for different reasons.

Craig Johnstone was the man responsible for the pretty atrocious lyrics for the Anfield Rap, Liverpool’s FA Cup final song in 1988, but thankfully the rap in New Order’s World in Motion two years later was written by Keith Allen.

And England’s song for Italia 90 remains immensely popular to this day, with Barnes still asked to perform his rap at every available opportunity.

It was so good, in fact, that when we got the chance to speak to Barnes, we didn’t even ask him about football.

Portraying a gangster in 1998’s Lock Stock and Two Smoking Barrels wasn’t enough for one of football’s hardest men.

Four years later, he tried his hand at music, too, releasing the album ‘Respect’, which is available to buy on Amazon for the bargain price of £7.21.

Here he is on Top of the Pops 2 performing one of its tracks, Big Bad Leroy Brown. We wouldn’t dare to comment.

In 1999, the same year as he won the treble with Manchester United, Andy Cole released the single ‘Outstanding’.

Produced by DJ Pied Piper, the man behind ‘Do You Really Like It (Is It Is It Wicked?), the track peaked at number 68 in the charts.

As it turns out, it wasn’t outstanding at all.

Strangely deciding to call themselves Glenn & Chris as opposed to Hoddle & Waddle, the then-Tottenham team-mates released two songs, but only the first, Diamond Lights, achieved any sort of success, reaching a peak position of 12th in the UK charts in 1987.

The song is as awful as you expect, but the cover is a thing of beauty.

He hasn’t released his own single yet, but it’s almost certainly only a matter of time.

He’s already starred in a music video, prematurely released by Adidas to effectively announce his move to Manchester United, with Stormzy providing the vocals.

Cue yer da’ shaking his fist at the screen.

The former Aston Villa and Coventry City striker is now a presenter on daytime TV show Homes Under The Hammer, but his diverse set of talents doesn’t stop there.

Dublin is something of a music pioneer, both being able to play both the drums and the saxophone, but his biggest achievement outside of football surely came when he invented his own instrument.

His invention, the Dube, is a six-sided percussion drum which is played with hands. But rather than let us explain it, allow Dion.

One of the most popular players in Newcastle’s recent history, Solano blew over his supporters at Tyneside with his range of passing and free-kicks skills.

But Solano is also a keen trumpet player – much to the annoyance of Sir Bobby Robson back in the day.

“I don’t think Bobby Robson was so keen on me playing my trumpet,” Solano told FourFourTwo in 2005.

“He didn’t know about it when he first took over as manager, but he soon found out when I rang him up one night and played down the phone to him. I’m not sure he was too amused.

“It’s the same with David O’Leary at Aston Villa, he’s not a fan of my playing either. Whenever I call him and he’s got his mobile phone turned off, I like to leave him a nice loud message with my trumpet!”