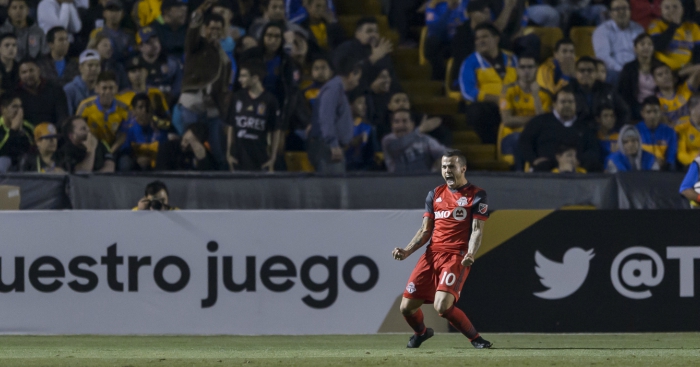 There are many reasons to watch MLS, but the main one is to watch former Juventus forward Sebastian Giovinco take free-kicks for Toronto.

After a frustrating nine years in Juventus’ first team, in which he was loaned out twice and failed to truly nail down a place in the starting XI, Giovinco joined Toronto in 2015 and has enjoyed a hugely successful spell.

In his maiden campaign he was named the league’s MVP, while last year he helped the side win a domestic Treble.

The 31-year-old has caught the eye on many occasions thanks to his remarkable ability to convert free-kicks, which he summed up succinctly after scoring yet another against Tigres in the CONCACAF Champions League.

And we’ve rounded up 13 of Giovinco’s best free-kicks to show why he is quite possibly the best dead-ball expert in the world.

Get the defender back, quick

We can’t quite work this out

You're not gonna believe this, but… Sebastian Giovinco did that thing again 💥🐜🎯#TFCLive | #AZLvTOR pic.twitter.com/MP6DBnNwB5

Put another wall on the line

Even on an American football pitch

Spare a thought for the goalkeepers

He did steal Heskey’s celebration though

We’d love to buy him a drink

Jozy Altidore scores, tries to head a beer thrown at him, Giovinco picks up the beer and drinks out of it. Amazing https://t.co/lM8l0sYPJU