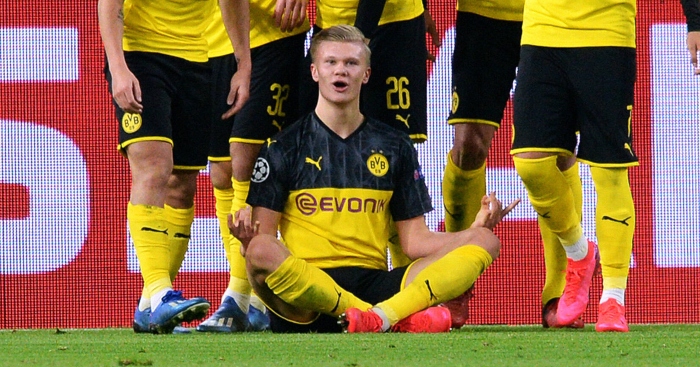 Erling Haaland has emerged as one of the best talents in Europe this season, having already scored 41 goals in 2019-20 to date.

Haaland burst onto the scene at Red Bull Salzburg and has continued to break records during his first two months at Borussia Dortmund.

And we’ve compiled some of the stats which show just how good the Norwegian striker has been.

– Since joining Dortmund in January, his 13 goals have come in only 826 minutes of football, averaging a goal every 63.5 minutes.

– Twelve of his Dortmund goals have come in the Bundesliga and Champions League, in which has had just 15 shots on target.

– Despite making just nine league appearances in Germany, only 10 players have scored more Bundesliga goals than Haaland this season.

– He won the Bundesliga player of the month award for January, even though he only played for 59 minutes.

– Haaland has as many Champions League goals as Barcelona (10) this season.

This angle of the Erling Braut Håland's goal is AMAZING!

The sound when the ball hits the back of the net is so, so satisfying 👌

Watch 360° highlights and instant replays of EVERY goal on the BT Sport app 📲 pic.twitter.com/sA3Gcvibow

– In all but one club competition he has played in this season, Haaland has scored more than a goal per game. The German Cup is the only competition he has failed to do so, although even in that he scored once in a 44-minute appearance off the bench.

– Roberto Firmino and Sadio Mane are the only other players to score 10 goals in their first season in the Champions League.

– He is the first teenager to score 10 Champions League goals in a single campaign. Kylian Mbappe is the only other teenager to reach that figure but the Frenchman did it over two seasons.

– Haaland’s 10 Champions League goals in seven games makes him the quickest player to reach double figures in the competition’s history.

– He is the first Dortmund player ever to score on his debut in the Bundesliga, DFB-Pokal and the Champions League.

– He has scored 41 goals in 34 appearances for Borussia Dortmund and Red Bull Salzburg this season, averaging a goal every 55.9 minutes.

– In his club career, Haaland has already scored 62 goals in 105 games and has eight hat-tricks to his name.

– A bonus stat for you: Haaland still holds the world record for the longest standing long jump for a five-year-old. An impressive 1.63m, set in 2006, if you were interested.