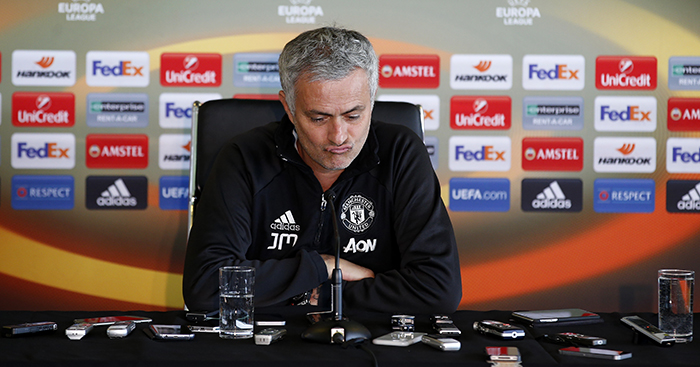 Jose Mourinho has entertained and infuriated English football fans from the moment he arrived in the Premier League.

Fresh from winning the Champions League with Porto and succeeding Claudio Ranieri at Chelsea, Mourinho gave an outrageous first press conference to promise he would succeed where his predecessor had failed.

The Portuguese was true to his word, winning six trophies during the first of two spells at Stamford Bridge, but his comments sent the British media into frenzy. He’s been repeating the trick ever since, winning league titles in four countries, before leaving his last three jobs, Real Madrid, Chelsea and Manchester United, under something of a cloud.

“Look, I’m a coach. I’m not Harry Potter. He is magical, but in reality, there is no magic. Magic is fiction and football is real.”

After his first game in charge of Real Madrid, a goalless draw against Real Mallorca.

“He must think I’m a great guy, he must think that because otherwise he would not have given me so much.”

On what God would think of him.

“I studied Italian five hours a day for many months to ensure I could communicate with the players, media and fans. Ranieri had been in England for five years and still struggled to say ‘good morning’ and ‘good afternoon.'”

In response to criticism from then-Juventus coach Claudio Ranieri in 2008.

“It is like having a blanket that is too small for the bed. You pull the blanket up to keep your chest warm and your feet stick out.

“I cannot buy a bigger blanket because the supermarket is closed. But I am content because the blanket is cashmere. It is no ordinary blanket.”

Mourinho on his injury crisis in 2007.

“Ricardo Carvalho seems to have problems understanding things, maybe he should have an IQ test, or go to a mental hospital or something.”

After Carvalho criticised Mourinho for not selecting him.

“That was not a football score, it was a hockey score…in training I often play matches of three against three and when the score reaches 5-4 I send the players back to the dressing room, because they are not defending properly.”

Reflecting on the North London derby between Tottenham and Arsenal, which ended 5-4 to Arsenal.

“Why drive an Aston Martin all the time when I have a Ferrari and Porsche as well? That would be stupid.”

When asked about Joe Cole, Arjen Robben and Damien Duff battling each other for a spot in the first team.

“The linesman scored the goal. No-one knows if that shot went over the line, you must be 100%.”

On THAT Luis Garcia goal for Liverpool.

“When they have somebody that wins four Premier Leagues for them, I become number two. Until this moment Judas is number one.”

“Pressure? There is no pressure. Bird Flu is pressure. You laugh, but I am being serious. I am more worried about the swan then I am about football.”

Mourinho during the title race in 2006.

“When I saw Frank Rijkaard entering the referee’s dressing room at half-time I couldn’t believe it. When Didier Drogba was sent off I wasn’t surprised.”

After Chelsea lost to Barcelona in 2005.

“Would you phone the president of Ghana?”

When asked by a Ghanaian journalist if he’d ever phoned Roman Abramovich to see how he was.

“We have top players and, sorry if I’m arrogant, we have a top manager.

“Please don’t call me arrogant, but I’m European champion and I think I’m a special one.”

We saved the best ’till last. Here is Jose Mourinho’s first press conference as Chelsea gaffer.

Arsene Wenger’s best rants & musings: ‘God created man, I am only a guide’