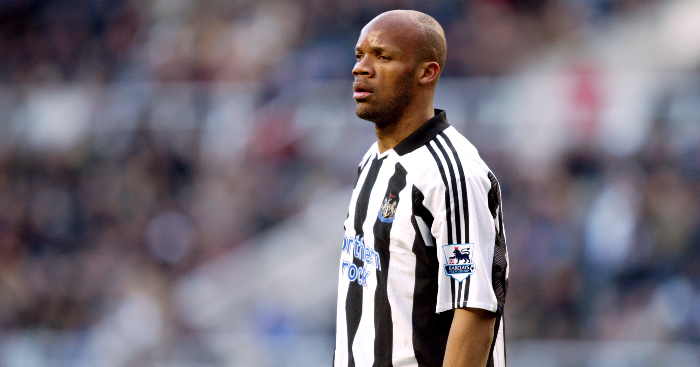 Newcastle United have become known for their lack of spending in recent years, but there was a time when they certainly weren’t afraid of a big-money signing.

Indeed, they broke the world transfer record to sign Alan Shearer from Blackburn in 1996.

That worked out pretty well, of course, but the Magpies have also spent big on players who should have been a success, only for things to conspire against them. Here are just a few of them.

If you splash £8million on a guy who was available for free just six months earlier, it’s probably because you expect good things of him.

Boumsong did not produce good things.

When you hear that he moved from St James’ Park to Juventus, you might be confused for a minute, but then you remember Juve were in Serie B at the time.

£8.5million is a lot of money for a player who spent his entire time in England seemingly unaware that he had a right foot.

Viana is one of those players who looks like he should have been a great footballer, by which we mean he was handsome with good hair, but it never clicked on Tyneside.

He did at least deliver on that promise later in his career, banging one in from his own half for Braga. Oh what might have been.

Cabella should have been brilliant. Signed in July 2014, he was coming off a career-best 14-goal season from Montpellier’s midfield, and had played his part in the club’s surprise title win two years prior.

It soon became clear, though, that Newcastle’s magic touch with French players was beginning to wane. He made minimal impact, scoring his only goal in what would end up being one of only three wins enjoyed by the club in the second half of the season.

At least he could laugh from back in France as the club suffered relegation one year on, having spent the 2015-16 season on loan at Marseille.

Cort’s lasting impression at Newcastle comes in an anecdote involving Shola Ameobi. Which probably isn’t what you want from a £7m signing.

When the striker joined from Wimbledon following the London club’s relegation in 2000, he was coming off a season of 34 games and nine goals in the league.

He fell short on both counts in his injury-hit three years at Newcastle, and failed to add to his 14 England Under-21 caps unless you count a handful of games for Guyana nearly a decade on.

Arrived with a big reputation after several good goalscoring seasons at Ajax.

Left with fans remembering him best for injuring himself with his own contact lens and suffering a collapsed lung more than once.

As one of our Newcastle-supporting friends puts it, having watched the Dutchman and his brother Luuk both struggle as St James’ Park, “Every injury was Siem, Luuk was just sh*t”.

Signing a World Cup winner is good, but there’s always an exception that proves the rule.

Guivarc’h scored one goal for Newcastle. Also only one in his France career, but people weren’t looking at that when he signed.

Luque was one of the most exciting players in the Deportivo La Coruña team that lit up the Champions League in the early 21st century, so Newcastle fans were right to have big hopes for the Spaniard.

Of course, he struggled for form and fitness, playing just 34 games and dropping out of the reckoning for Spain’s 2006 World Cup squad despite scoring twice in qualifying before his move to England.

At least he scored in the Tyne-Wear Derby, eh?

Tomasson isn’t the name most people bring up when talking about dud buys from the Eredivisie, but he was one of the first to fit the bill.

The Dane had scored 24 times for Heerenveen, prompting Newcastle to stump up the cash to sign him.

Perhaps things would have gone better if he wasn’t forced to deputise for the long-term injured Alan Shearer, but probably not. He went on to score 55 times in four years at Feyenoord but could still be relied upon for a comedy miss.

The weird thing about Merino is that he was very good on loan from Borussia Dortmund, giving Newcastle fans even more of a reason to expect him to thrive.

However, almost as soon as the move was made permanent, something changed.

Still, they’ll always have that 1 (one) goal.

Newcastle’s record signing until Miguel Almirón’s arrival, Owen didn’t have a terrible record in front of goal but can still be considered a disappointment.

Why’s that? Well, let us direct you to what he said about his time at the club.

“Michael didn’t want to risk his groin because he was out of contract in the summer and was saying, ‘I’ll not get a contract at another club if I’m injured’,” former Newcastle coach Paul Ferris would later recall after Owen sat out a game against Fulham in 2009. Newcastle lost the game, and ended up being relegated by a single point.

Thauvin was great before joining Newcastle and great after leaving the club, it’s just the bit in the middle that was a let-down.

A run of 50 goals in three season’s and a World Cup winner’s medal doesn’t exactly tally with a man who found the net just once for Newcastle, against Northampton Town in the League Cup.

Still, at least he had a lovely tuxedo.

Bigirimana was seen as one of the most exciting young prospects in English football when he made his debut as a 17-year-old at Coventry.

Newcastle paid big money for the teenager, who got some game-time under Alan Pardew in his first season but then faded into the background.

If you want a guide to how the England Under-20 star regressed, he is now playing his international football for Burundi.