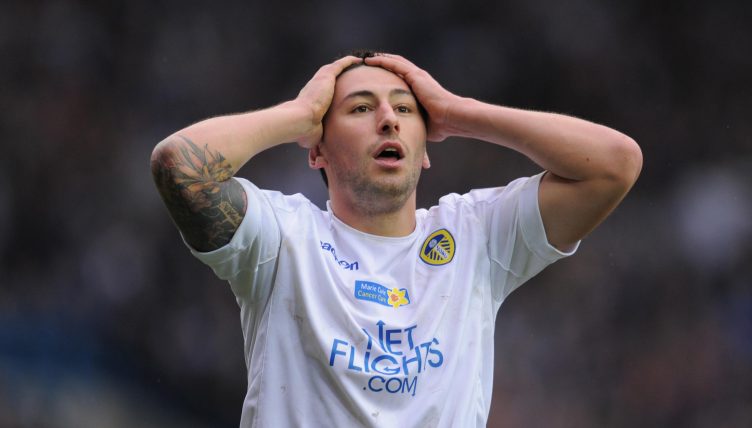 The controversial former chairman of the club presided over one administration, one relegation, five managers and countless terrible signings in his eight years at Elland Road.

We’ve rounded up some of the worst of those transfers, although we’ve not included loan signings otherwise we’d be here all f*cking day. We’ve also tried to avoid being too mean about players that were just quite bad at football (again, we’d be here all day) so have instead opted for the ones that simply made us ask, ‘WTF?’

Signed in the wake of Leeds United’s play-off final defeat to Watford for £700,000 after impressing for Luton Town, Nicholls injured his knee in his very first training session with his new club.

The midfielder made just six appearances before Christmas after suffering another injury upon his return, but that didn’t stop Dennis Wise – instated as manager following the sacking of Kevin Blackwell – naming Nicholls club captain.

“I want to show the Leeds fans what I am all about,” he told the Yorkshire Post, adding: “I don’t want to be remembered as the captain of the Leeds team that was relegated to League One.”

His first game as skipper ended with a red card in a defeat to Ipswich and he made his 15th and final appearance for the club in February before being outcast after asking to return to Luton.

*adopts Mike Bassett narrator voice*: Leeds United were relegated at the end of the season.

When your captains go from Rio Ferdinand and Dom Matteo to Paul Butler and Kevin Nicholls 😷 #lufc #mot pic.twitter.com/J4Tuh3DEao

In a similar case of a new signing being doomed from the outset, Stone was also injured in training shortly after arriving at Elland Road and eventually required three operations to recover from an Achilles injury after also contracting MRSA.

The winger managed to return at the end of the 2005-06 season just in time to watch from the bench as Leeds were beaten 3-0 by Watford in the play-off final before retiring midway through the following campaign after sustaining yet another injury.

Like Nicholls, Stone also made just 15 appearances for Leeds. To his credit, however, at least he didn’t sh*t out and ask to go to Luton.

Still worth building your Leeds team around in Football Manager 2008, less so in actual real life when you’re trying to get out of League One.

Da Costa made one start for Leeds, a 41-minute run out followed by a red card in a Football League Trophy defeat to Bury before being released.

We’ve just found an article on the Yorkshire Evening Post asking: ‘What are your memories of Filipe da Costa? Register and post your comments below.’

There are no comments below.

We’re not saying Ken Bates’ budgetary restrictions prevented Gary McAllister from signing a decent defender, but Telfer was convinced to come out of retirement for a second time to join Leeds.

A couple of months after leaving Leeds having fallen completely out of favour following the appointment of Simon Grayson, Telfer found his level by joining *Slough*.

Even McAllister lost faith in Telfer before he was sacked, dipping back into the transfer market to sign one Mansour Assoumani…

December 17, 2008: Leeds sign Assoumani on a one-month contract after the defender scores in a trial against York City.

January 18, 2009: Leeds release Assoumani after he failed to make an appearance under new boss Simon Grayson.

Another Gary McAllister free transfer, the warning signs were there for Leeds when Christie, already plagued by injury throughout his career, was injured during his trial at the club in January 2008.

Come November of the same year, Leeds took a punt on the striker after he returned to fitness. Four appearances, one goal and a spinal injury later, Christie retired to become a Jaguar salesman.

You know that thing we said about not wanting to be mean about players that just weren’t very good at football? That’s still the case, but Varney was so utterly dreadful we’re making an exception.

See above, although he was at least good humoured about his levels of crapness, having scored as many goals at Elland Road for Swindon as he did for Leeds.

Good on ya, Billy. Shame you couldn’t have just scored some goals, like.

📝 Leeds United take on Hull City tonight, where plenty of players have played for both clubs

🙈 One of those is Billy Paynter – who had the greatest crossbar challenge attempt out of any Leeds player.#LUFC pic.twitter.com/eBxEOlByUf

Look, the whole point of this article is to show how Ken Bates really didn’t like putting his hand in his pocket and actually sign some decent players.

But it also goes some way to showing that Neil Warnock was absolutely taking the p*ss as Leeds manager.

Leeds went to an awful lot of effort to sign Griffiths in January 2006. Compensation was demanded from Swiss side Xamax after the club delayed the transfer despite everything being agreed, but they finally landed the Australia international following a five-week hold-up.

Griffiths reportedly took a big pay cut and rejected moves to Premier League side Bolton as well as Leicester City, Derby County, Sheffield United and Hearts to join Leeds, but he probably shouldn’t have bothered.

The winger made just two substitute appearances for the club, costing him a place in the Australia squad for the 2006 World Cup squad.

He later accused manager Kevin Blackwell of “crucifying” him and offering “non-stop criticism”.

A nomadic career in non-league took Elding from Boston to Stevenage to Kettering before catching the eye in League Two with Stockport County.

Fifteen goals in the first half of 2007-08 saw Leeds sign the striker in January, but he scored just once for the Peacocks’, in a dismal home defeat to Cheltenham.

In June he rejected a move to Crewe, vowing to fight for his place by telling the Yorkshire Evening Post: “Realistically, Leeds are the biggest club I’m ever going to play for, and I’m not going to give that up at the first opportunity or for the wrong reasons.” In July, he joined Crewe.

It wasn’t long before he was back in non-league with Kettering, where he returned to Elland Road in the FA Cup, obviously scoring an equaliser as the underdogs took Leeds to extra-time before losing 5-1.

After winning Millwall’s Player of the Year in 2006, Livermore joined Leeds that summer in a £500,000 deal, only to be sold to Hull City for the exact same fee two weeks later after Kevin Blackwell managed to secure the signing of *checks notes* Kevin Nicholls. Oh FFS.