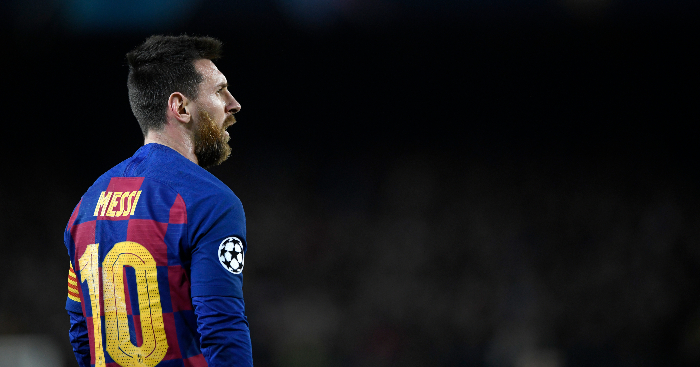 Lionel Messi marked his 700th club appearance with a typically brilliant individual display in Barcelona‘s 3-1 win over Borussia Dortmund, setting up two goals and scoring one himself.

The Argentinian magician looks just as good as ever at the age of 32. He looks likely to be setting new records, hitting new milestones and generally blowing our minds for a few more years yet.

But we figured 700 games was as good an opportunity as any to break his incredible Barcelona career down into his best records and most unbelievable stats.

– He’s scored 613 goals in his first 700 appearances. For reference, Cristiano Ronaldo had scored 504 goals at the same stage.

– That total includes 40 hat-tricks, 125 braces, five four-goal hauls, and even a five-goal haul against Bayer Leverkusen in 2012.

– Not only is Messi the top scorer in La Liga, he holds the record in Europe’s top five leagues. Gerd Muller was the previous record-holder with 365 Bundesliga goals, just ahead of Jimmy Greaves in England with 357. However, the very much still-active Ronaldo isn’t far behind on 421 goals.

– Messi holds the record for most club goals in any single-season campaign in Europe’s major leagues. He scored an incredible 73 goals for Barcelona during the 2011-12 season. But Glenavon FC’s Jimmy Jones scored 74 in Northern Ireland in the 1956-57 season.

– He’s also got the most recorded assists in world football history – 237.

Ahem! Make that 237 assists! (But your adjectives are spot on, Gary!)😉 pic.twitter.com/NoLdx0Ro0v