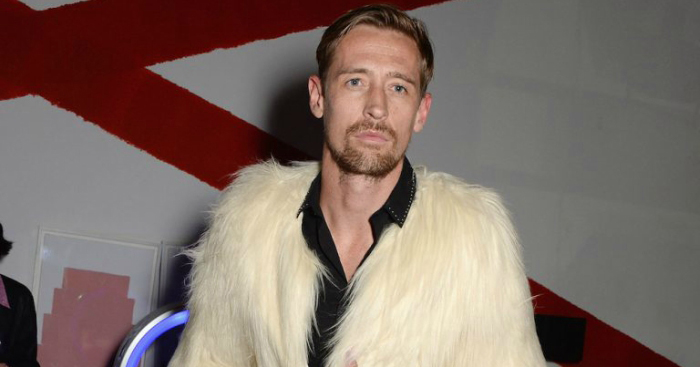 Peter Crouch is a bloody good footballer. But it’s his wit and self-deprecating humour off the pitch that sets him apart from his peers.

Crouch is the 22nd highest goalscorer in Premier League history. He’s the eighth highest English goalscorer in the Champions League. His record of 22 goals in 42 England games is one of the best around.

And as if those statistics – not to mention his 6ft 7in frame – don’t make Crouch stand out enough, Stoke City’s record Premier League goalscorer is also very, very funny.

Everyone is familiar with his quip that he’d be a “virgin” if he wasn’t a footballer, but that’s just the tip of the iceberg. In this increasingly anodyne world of football, he is the perfect antitode, a real rarity – a footballer unafraid to show a personality.

Here are just a few of his best lines…

When Harry Kane is kissing the World Cup trophy on a balmy-Russian night, Crouch reckons there’ll only be one person he’ll need to thank after mentoring him at Tottenham…

“I’ve taught him everything he knows, so I knew he was going to be good.”

LISBON – Rafael Benitez wants to diffuse the tension by taking his Red Men on a go-karting trip ahead of their 2007 Champions League Final clash with AC Milan. But Crouchy’s brakes have broken…

No need to hike

His towering frame doesn’t just help him during 90 minutes, it also comes in handing when wanting a scenic tour.

“At least I don’t have to go all the way to the top to get a good view.”

“I’m lucky, I never had to watch my weight. In the summer I go off, don’t do much in the way of exercise, eat what I like, come back exactly the same weight. Which pi**es off a few I can tell you. The way Charlie Adam looks at me…”

A whole stadium stands to applaud, releasing their tribal shackles. They’ve just witness footballing beauty in its purist expression – a sumptuous bicycle-kick from Cristiano Ronaldo against Juventus. Among the admirers is Crouch, for he’s finally found an equal:

“There’s only a few of us who can that.”

Time for loved ones

Even in the off-season, the ex-England striker doesn’t miss a trick.

“Summer for me is about time with the family.”

Show me the money

When asked how much he’d be worth at the peak of his powers in today’s transfer climate, the 6ft 7in striker replied:

“There are players going for £10m and they’ve barely played in the Premier League. So £30m? I’d be worth much more!”

After a headline-making eight-goal season in 2013-14, Crouch sensed something was amiss at FIFA.

“I knew there was problems with decision making at FIFA when I didn’t make the Ballon d’Or shortlist.

“Ronaldo and Messi just pipped me. I’d had a great year that year and I was looking forward to going to the ceremony. Obviously, there’s payments being taken place at FIFIA and I didn’t get on the list.”

Crouch’s style of play has not been to the taste of many over the years, but he has the good humour to recognise this:

“I’ve always been in and out of fashion – mainly out, actually…”

No invite? No worries…

When Jermaine Defoe revealed that the 2010 World Cup was so boring that he resorted to watching Wayne Rooney’s wedding video, their fellow striker was not impressed.

“Fuming I never got an invite. I was watching Milner’s birthday celebrations.”

Fuming I never got an invite . I was watching milners birthday celebrations 😒 https://t.co/iXMKSIveyY

As the Egyptian King – Mohamed Salah – netted against Brighton on the final day, in the process breaking the record for most goals in a season, Crouch completed a comeback for already-relegated Stoke City against Swansea.

“Pleased to equal Salah’s Premier League record today. We both got one.”

Maybe he wouldn’t be a virgin?

Remember when austerity-Chelsea went all Conservative 2010 manifesto in the January transfer window, looking to pick up Crouchy on the cheap? Well, he had the perfect response when the Blues instead opted for Arsenal forward Olivier Giroud:

“I’d go as far as to say they got themselves the division’s second best looking target man.”

One moment tops it all

“I’ve had some proud moments in my career but 2nd in the dads race today was special.”