13 of the best quotes on Jordan Henderson: ‘The perfect role model’ 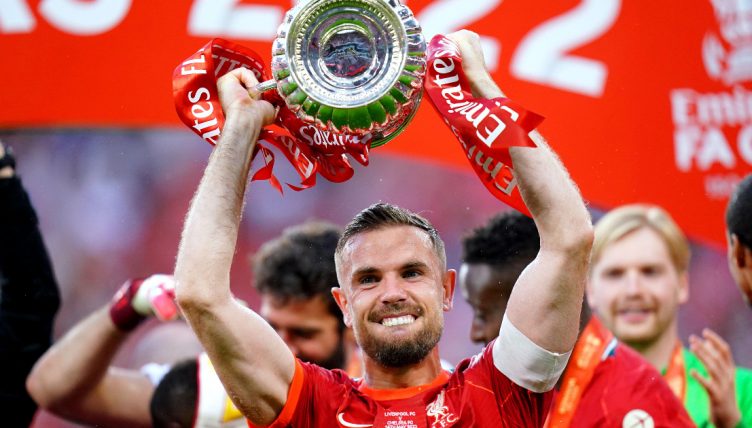 Jordan Henderson’s incredible turnaround in reputation over the past few years has culminated with him lifting every trophy going as Liverpool captain.

So often a scapegoat for club and country, Henderson was a key member of the England squad that reached the semi-finals of the 2018 World Cup and has now lifted the Champions League, UEFA Super Cup, Club World Cup,  Premier League, FA Cup and League Cup – as well as being awarded the FWA Footballer of the Year

We’ve rounded up some of the best quotes about the midfielder, whose plaudits only the most stony-hearted Manchester United fan could begrudge.

“He is exceptional; he is outstanding. Gini (Wijnaldum) and Hendo, especially, because they have had to play the biggest number of games this season.

“What they do is just incredible – absolutely incredible. I do not take that for granted for one second. If anybody who is with us still doesn’t see the quality of Jordan Henderson, then I cannot help them.

“Is Hendo the perfect football player? No. Do I know anybody who is? No. But is he unbelievably important to us? Yes.”

“It’s no surprise to me how he’s handling himself on and off the pitch,” Gerrard told BT Sport. “Obviously, I played with him for numerous years with Liverpool and England. A very fit, athletic boy who’s selfless in his approach on the pitch, puts everyone else above himself.

“When you play alongside him you appreciate the job he does for the team and I think over the years he’s been developing parts of his game. His passing range now is fantastic.

“He’s always there for the team. I’ve watched him grow as a human being with interest – he’s always been a great lad and a great team-mate.

“It’s no surprise now that people are starting to recognise what a man he is, both on and off the pitch. Every bit of praise he gets he deserves it because it’d true, and I can guarantee that because I’ve been alongside him.”

“It’s an absolute pleasure [for him] to be my captain and everyone’s captain.”

“Jordan is such an important player for this team,” Van Dijk told The Athletic in 2019. “The contribution he makes goes unnoticed sometimes. I don’t know if he’s under-appreciated outside the club, but inside the club I know how highly we all think of him. He’s our captain and he always leads by example.”

Speaking in the same piece on The Athletic, Alexander-Arnold said: “Jordan is the perfect role model. You can see how much being captain of this football club means to him. Anyone who isn’t pulling their weight gets a bollocking off him.

“He’s not bothered about being in the spotlight, he’s happy to go under the radar and just go about his job. And he does everything for the team rather than himself.”

“He’s been a beacon of hope in dark times for the country, a nation craving real leadership,” Winter wrote in a tribute to Henderson for Liverpool’s official website.

“And he’s a winner on the pitch, too, helping end that 30-year wait for the title. Gerrard’s right. The captain’s armband, that symbol of taking responsibility, suits Henderson well.”

“His game’s changed so much,” Neville told ITV in June 2018. “Think about four years ago when Liverpool nearly won the league under Brendan Rodgers… he was a box-to-box midfield player and Steven Gerrard was sitting in there. Now he has evolved his game, he’s matured.”

Neville added: “He wants to learn all the time, he works hard, he’s conscientious, he’s a manager’s dream.”

“You cannot speak highly enough of Jordan. He’s a fantastic guy around the place,” McAllister told Liverpool’s official website. “I think what you see on a matchday is what you see every day on the training field.

“He’s always setting an example in how he navigates from Monday to Friday through the training, setting those standards and those levels. I’m really pleased for the guy.”

“I remember when he signed for Liverpool, it felt as if he was lucky to be there,” Crouch wrote in the Daily Mail in June 2020. “But now, really, they are lucky to have him. He took over the captaincy from a legend, did things his own way and now has the trophies to go with it.”

Jordan Henderson seeking out his dad after the final whistle and breaking down in tears…#BestOf2019 pic.twitter.com/VCZIBQI26Y

“I have to say I am delighted but a little baffled that Jordan Henderson is getting more praise this season than in previous years,” Carragher told the Daily Telegraph.

“I think that probably says more about those suggesting he has massively improved rather than the player himself because – as I am sure Jurgen Klopp will testify – his consistent excellence as captain has been fundamental to Liverpool’s return to the top.”

“I saw somebody who was better than what we had at that time in that position. That was on the pitch. Then when you get into discussions, he was very balanced, his dad came with him for the conversations, which was – for me – a good sign.

“He had a secure home life, which helps, and he was determined to be a success in football. If I hadn’t given him a chance, it would have been me who would have been wrong. I’m not being modest – you see something you like and you get it.

“He will be the only Liverpool captain who has lifted this trophy but is Club World Cup winner as well. He is up there with the captains who have picked up the Champions League.”

“He’s our skipper, he’s a fantastic character. If I had to write a book about Hendo, it would be 500 pages. So I’m very positive. The most difficult job in the last 500 years of football was to replace Gerrard.

“In the mind of the people it was like, ‘If it’s not Stevie, then it’s not good enough.’ And [Henderson] has dealt with that outstandingly well. So he can be really proud. Now we have to think of the future and he is a very, very important part of our team.

“He deserves all the praise, but he doesn’t get too much.”

READ NEXT: Ranking Kenny Dalglish’s 11 signings back at Liverpool from worst to best

TRY A QUIZ: Can you name Liverpool’s XI from Jordan Henderson’s debut in 2011?