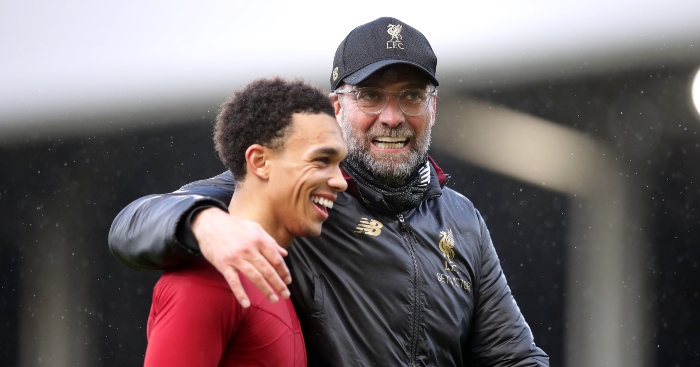 Whether at Liverpool or in Germany, Jurgen Klopp has had a huge impact on dozens of footballers who have had the good fortune to play for him.

The Reds manager has been a popular figure wherever he’s gone, but sometimes it’s hard to put into words just how important he is to those around him.

Fortunately, we don’t need to, as a number of his current and former charges have done the work for us. If you want to see how Klopp has been the catalyst for players stepping up their game, look no further.

“He is a bit of a funny guy, but at the same time, he is a serious guy. Usually when I am talking to him off the pitch it is about personal things. Things about lifestyle and life – and that is important to me. I think I have somebody I can confide in.”

“I think I improved a lot in every way: physically, tactically, mentally, I learned a bit of every aspect.

“I am never tired of praising Klopp. He has so many good things on and off the pitch. He really helps us on a daily basis, we learn so much from him in every way.”

"The manager coming to the football club was not only good for me, but for the whole team."

“I came to Dortmund from a relatively small team and I struggled during my first six months to find my place there. I was a bit shy and, to be honest, I wasn’t brave enough to do certain things. But thanks to the help of my team-mates, and with the help of Jürgen and his staff, too, I managed to improve.”

“I have a very similar connection with Jurgen Klopp at Liverpool as I had earlier with Ronald Koeman at Southampton. Like Koeman, Klopp knows exactly how to get the best out of me – by being critical.

“When the media are hyping me and being very positive, he will downplay the praise and all that—often with a wink. And when I was voted UEFA Player of the Year and had to go to the ceremony, Jurgen told all the lads that I was picking up the trophy on behalf of the entire team.

“All the boys in the squad know I can take that sort of stuff very well. I know what he means. At the same time, the boss gives me a lot of respect and responsibility.”

“I was not used to defending from the front. I didn’t even know that it was a two-way game. Jurgen taught me modern football.”

“I am thankful to Klopp. He worked on my personality and the psychological part. Klopp showed me the way. He supported me and told me I had to keep my head up because good things were coming.”

“He taught me how to have a strong personality and how to improve my level. I have a lot of respect for this man.”

“He’s just a great coach, one of the best in the world. A real leader. I learned so much from him, especially on the mental level.”

“He taught me everything about professional football. At that time, I was just 17 and coming up from the youth team. He introduced me to everything. He let me play.”

“I’m delighted I was able to get to know such a coach and such a person as Jürgen because he’s amazing – both as a coach and a person. I learned so much from him and that means a lot.”

“A lot of teams have qualities, but when you have a good manager who is tactically strong and have a good club with good fans, then there’s no secret. You can achieve great things.”

“If Jürgen sits in front of you with his aura, which he radiates even when speaking, with his stature, it’s really quite impressive.

“He was definitely one of the reasons why I signed for Dortmund. Jürgen can develop players and make them better. He has a special way about him.”

“Obviously without him who knows what would’ve happened. He’s the one that’s given me the most opportunities, more than I could even ask for.”