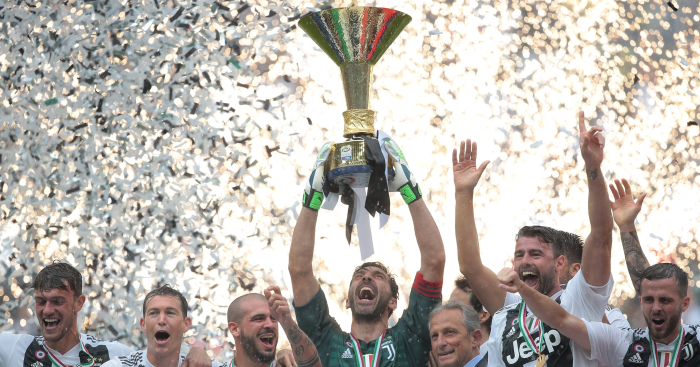 Like him or not (and seriously, who doesn’t?), anyone growing up in the late nineties and noughties has an admiration of some sort for Gianluigi Buffon.

The goalkeeper has been a mainstay between Italy’s sticks for 21 years, and has captured the imagination of almost anyone that has watched him play throughout his career.

As he joins PSG having brought an end to his long and legendary spell at Juventus, here are just some of the quotes that sum up Buffon as a footballer, and a man…

Emiliano Viviano first compared Buffon to Diego Maradona in 2010, when he was standing in for the injured goalkeeper on the international stage.

Viviano isn’t alone in his thoughts either, with Antonio Nocerino also comparing him to the Argentinian superstar.

“Buffon is the Maradona of goalkeepers, it’s not easy to find another like him.”

Gianluigi Buffon here, showing that he’s a man of the people during Euro 2012. It must be working somewhere down the line considering he’s saved over 30% of the penalties he’s faced. Although, it was only Ashley Cole that he could thwart in that tournament.

“I don’t watch penalties in my hotel room. I watch naughty videos.”

Zlatan Ibrahimovic isn’t the greatest for dishing out praise, mainly because it would take attention away from him. Every now and then though, he maybe realises that he isn’t quite the best at everything.

“In goal, Buffon is the wall.”

Buffon has been threatening retirement for a couple of years now, but never quite got round to it.

Last year he joked about going out with a high-profile red card. To say that came back to haunt him would be an understatement, with the stopper’s red card in the dying minutes of the Champions League threatening to end his distinguished European career on a sour note.

The fact he’s not finishing perhaps shows that he’s having second thoughts on that suggestion.

“How do I imagine my last ever game? Maybe I’ll go out like [Zinedine] Zidane, headbutting someone on the pitch!”

The time he’s taking to make a decision over his future in the game, would anyone really be surprised by this?

If it ever comes…

Come on, you’re taking the p*ss now. Who wouldn’t love to see Buffon between the sticks at 80? He’d probably still do a job.

“Even at 80, if suddenly no goalkeeper would be there, they should call me – I would train briefly and then jump in.”

It’s all about mentality

“In the end, you need to be a little masochistic to be a goalkeeper. A masochist and egocentric as well.”

We could vouch for one, but not the other.

Here’s a little number from his playlist:

Top of the class

When asked about the best players that he had worked with in his career, Fabio Capello kept the list relatively short, with room for some special praise for the Italy number one.

“The best players I ever coached? I could select two whole teams, but Buffon would be the only player in both of them.”

The people’s goalkeeper strikes again, although you’d think that anyone who can afford the premium channels in a five-star hotel can afford a slightly fancier car than one that looks like it’s built from the cast offs of a Rover Mini Metro.

“Maybe I’m the only football who isn’t interested in cars. My Lancia Y gets me around.”

Only once a week?

“My worst vice is gluttony. I try to keep myself under control because I’m an athlete, but once a week I like to pig out and act like a normal person.”

We’ll drink to that.

Okay Gigi, we get it, you like a bit…

“I would say that I am having less sex now that I’m playing in Serie B – there is more to think about in this division.”

Out of this world

Buffon admired the beyond-world abilities of Lionel Messi ahead of Juventus’ 2015 Champions League final against Barcelona, describing him as part of the “strongest attack in the world”.

Messi didn’t score that night, though his strike partners did. Maybe he is human at times after all?

“Messi is an alien that dedicates himself to playing with humans. The only hope is that this Saturday he will be from earth, like the rest of us.”

Marcello Lippi managed Buffon for both club and country, with the gloveman helping Italy to a World Cup in 2006.

The now-China manager holds high admiration for him, to the point that he continually calls on Gigi to halt his retirement.

“Gigi is one of a kind in every way. My wish is for him never to change.”