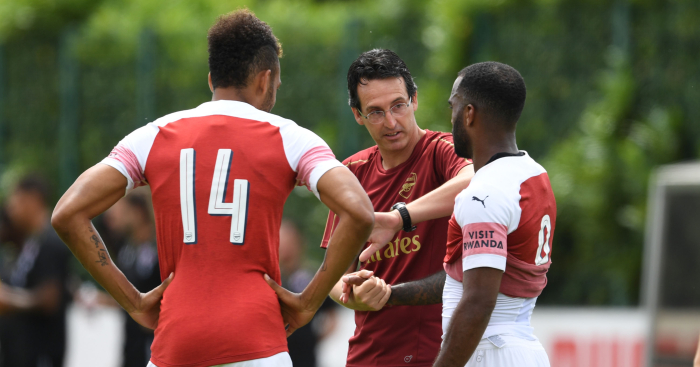 Arsenal fans are preparing for a season under the management of someone other than Arsene Wenger for the first time in over two decades.

Wenger stepped down at the end of last season and was replaced by former PSG and Sevilla boss Unai Emery.

We’ve taken a look at what those who have worked closely with Emery have said about the Spaniard to try explain his philosophy.

Arsenal players will have to get used to Emery’s meticulous attention to detail in preparation for every game. Former Spain international Joaquin famously quipped: “Emery put on so many videos I ran out of popcorn.”

But an anoymous Almeria player went to even greater lengths to describe Emery’s exhaustive methods in an interview with The Guardian.

“Emery is a colossal pesado (pain in the arse),” he said. “The players hate him.

“He tells you the same things every week, like you’re a little kid, ramming home his point – like the one about an open hand only delivering a slap but a fist, with everyone tightly packed together, being capable of doing real damage.

“He goes on forever, you get bored stiff, you think it’s all bollocks … but it works. It’s so relentless that in the end every single player knows exactly what he wants.”

Much has been said about Emery’s video sessions, which are largely presented as detailed tactical breakdowns of the opposition.

However, Andreolli, who played under the manager at Sevilla, lifted the lid on how they are also used as motivational tools.

“Emery has one great quality: he is an extraordinary motivator,” the Italian defender told The Observer. “His speciality is preparing for matches, speaking at great length to his players.

“I remember when I was at Sevilla we had long squad meetings where he would first show various tactical videos and then motivational films.

“He wanted to really get us going, to light a fire inside us. More than once we stayed literally for hours in a room watching motivational videos, so when we got to the game we were really hungry for success.”

Arsenal often deployed a back three last season and there has been a lot of speculation about how the Gunners will line up under Emery.

Speaking about his favoured formation, Emery said: “We are prepared to work with different systems. The 4-3-3 is the main system we use, it is a great for keeping possession and applying pressure. But after that we need to have another system for different matches.

“Most importantly, it’s getting the balance and positioning on the pitch with and without the ball.”

“We are more aggressive on the pitch, we try to score more goals. Last season with Blanc we scored a lot of goals, but we did not really try to score the second, the third every game.

“Now with Emery we want to score more goals and respect our opponent. I think we are better now.”

While PSG were eager to score as many goals as possible, Marquinhos suggests there was no recklessness from Emery, who instead helped instill an air of caution in their play.

“Emery has had a big hand in this title. He made us very careful and gave us a good philosophy. It’s always beautiful to be champions, it’s part of the story.”

Reinforcing this point, Emery is said to be particularly focussed on the defensive side of the game, which will be music to the ears of many Arsenal fans.

“From a tactical perspective, he is perhaps better suited to Italian football than the Spanish game,” Andreolli told The Observer.

“On the training pitch he works hard on defensive phases and how to counter particular opponents.

“Obviously, he doesn’t have exactly the same tactical priorities that we have in Italy, but he works particularly hard on this aspect of the game, more than many other Spanish coaches.

Bacca thrived at Sevilla under Emery, scoring 49 goals in two seasons, but was still not allowed to ignore his role when his team were out of possession.

“There are qualities I’ve now added to my game, like defending more and helping the team. At previous clubs my role was more about scoring, but at Sevilla I also have defensive duties.

“Sometimes other teams can get on top of you, but by defending you can get better opportunities in attack, and Emery has showed us that.

“I’m more involved in the game now. I play further back, find space better and get more chances in front of goal.”

Arsenal have been criticised for celebrating fourth place in the past, but Emery – who won three Europa League titles in a row at Sevilla – understands that fans remember trophies most fondly, even if they generate less of an income than Champions League football.

“Fans want their emotions to come to the surface and the only to way to make that happen is to give them a team that transmits emotion: intensity, attacking, scoring goals, competing, fighting. That awakens them. The fans want emotions.

“The Champions League generates more money and allows you to buy better players but what fans really want is to enjoy their team, to win things. If you have money but you don’t generate feeling and emotion, it’s worthless.

“You can be in the Champions League and generate money but if you get knocked out in the group it means nothing to the fans. Sure, you’ve made £20million, but what does that mean to them?”

Despite demanding a lot of his squad on and off the pitch, Emery is not one to give his players the cold shoulder and is happy to take on board their opinions of his methods.

“Blanc had certain things going for him, but I think Emery is a little closer to the players,” Rabiot said. “This is a coach who really communicates with everyone.

“He is asking us our opinion after the sessions, what we liked, what we didn’t like. He asks if you are not too tired after training.

“This is really important for the staff to know as they can then adapt [the training sessions]. They need to know if we can withstand the workload being asked of us.

“Communication is essential, not only in football but in all sports. This is what I find really good about Emery.”

French football writer Julien Laurens, however, suggests Emery took too much credence from what his PSG players told him.

Laurens told the BBC: “His first game at PSG was the 2016 Trophee des Champions – the French Community Shield – against Lyon and they won 4-1. PSG played with an intensity like they never had before. It looked like his philosophy – pressing high, running a lot, attacking a lot, defending a lot, full backs bombing forward.

“But then the players said they should go back to what they know because they were used to tiki-taka football where they took their time.

“Emery had to evolve a bit to accommodate his players, when it shouldn’t have been like that – it should’ve been the players accommodating his philosophy.”

That personable side to Emery helped convince Llorente to sign a new contract at Sevilla.

“The important thing is that I’m at Sevilla, that both the club and the fans, and especially Unai Emery, have loved me so much, and there is no doubt this was the best option for me.”

Even if you aren’t in his team, Emery has high standards for those outside his starting XI.

Speaking after winning the Europa League in 2015, Benega said: “We have a great coach and he is getting the very best out of us – we don’t relax whether we are on the pitch or on the bench. We have really healthy competition for places here.

“[Emery] supported me, pushed me and helped me develop. Winning this final and going straight into the Champions League – what more can you ask for?”

The man himself has spoken about how he hopes to evolve Arsenal’s philosophy from the foundations left by Arsene Wenger.

“Arsenal play ­possession football and throughout my career, I’ve ­always been a coach who wants ­possession.

“There is ­something I would like to add to my ­philosophy, that I like to win the ball back as quickly ­as possible.

“So it’s about two things: possession and ­pressing. What I want is for Arsenal to ­transmit energy and emotion to the fans.”