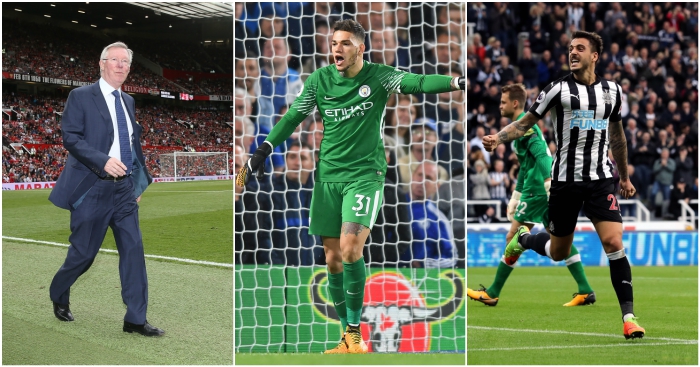 Fergie may have had a slightly strained relationship with journalists and the media at times during his 27 years as Manchester United manager, but he paid his respects to a former sparring partner this weekend.

Manchester Evening News’ chief United reporter Stuart Mathieson was covering his final match at Old Trafford after 22 years in the job, and Fergie relished the chance to send him off with a laugh and a joke.

Sir Alex presents @StuMathiesonMEN with a gift after 22 years as MEN’s chief Utd reporter. “You talk longer than my f**ckin wife.” 😂 #mufc pic.twitter.com/LZzL0wp4Xc

We’ve been impressed by Ederson’s distribution on a number of occasions already this season, and the goalkeeper proved why Manchester City spent £35million to secure his services against Chelsea.

In another commanding and assured display, the Brazilian excelled at the bread and butter of goalkeeping, and then also showed off his brilliance with the ball at his feet.

It’s fair to say that Joselu needed a slice of luck to score the equaliser in Newcastle’s 1-1 draw with Liverpool, with the ball ricocheting off his shins and into the back of the net following a tackle by Joel Matip.

But it’s hard not to love the striker’s priceless reaction, from ‘oh f*ck’, to ‘oh yes’, to ‘yeah, I definitely meant that’.

Football fans are defined by their gallows humour and Crystal Palace supporters have needed it more than most this season.

Pointless and without a single goal in the Premier League, fanzine Five Year Plan managed to solve the problem of their September Goal of the Month competition – courtesy of their victory over Huddersfield in the League Cup.

@CPFC ⚽️Goal of the month, for September. Vote for your favourite👍🏼🔴🔵 #cpfc pic.twitter.com/1NFQQoi6LD

Sitting second in the Championship table and with a host of exciting players, Wolves are looking good for a potential return to the Premier League next season.

Spare a thought for Burton’s former England international, Stephen Warnock, who was completely taken to the cleaners during the brilliant build-up to Wolves’ fourth goal at the Pirelli Stadium.

Newcastle fans unveiled an impressive banner in support of Rafa Benitez ahead of their draw with Liverpool, referencing a song Valencia fans used to sing about the manager.

In Spanish, it read: “We will follow you everywhere, we’ll always have your back. In spite of the lies they tell us, we’ll never doubt you. We are with you.”

And Rafa certainly seemed to appreciate the gesture.

“I didn’t expect it (the banner) – and in Spanish! The fans' support is fantastic. Hopefully I can give them what they deserve” – Benitez pic.twitter.com/EZuFmWteXn

On a difficult day for Barcelona, they still managed to ease to a 3-0 victory over Las Palmas in front of an empty Camp Nou.

Despite all three points being wrapped up, Luis Suarez was still disgusted at his failure to convert a late chance, and briefly gave us his best impression of the Incredible Hulk.

But we do know that goalkeepers going up for corners, attempting stepovers, losing the ball, recovering it, creating a goal, then going mental is absolutely brilliant.

It’s safe to say Super Mario was not impressed by Nice conceding three goals to Marseille just before half-time.

Real Madrid finally secured their first home victory in the league this season and had Isco to thank as the midfielder scored both goals in a 2-0 win over Espanyol.

But we’re more concerned about this touch from the Spain international. Absolutely lovely.

Atalanta came back from 2-0 down to earn an impressive point against Serie A champions Juventus and any fans of bullet headers really need to watch Cristante’s equaliser.

Remember him? The striker who was really good on Football Manager? You know the one.

The former Brazil international has been nothing short of prolific for Turkish outfit Alanyaspor over the last two seasons, and scored an incredible, improvised goal this weekend.

Finally, it’s only right to sit back and reflect on an important birthday which took place on Saturday…

I would like to wish a very happy and gloriously cynical 30th birthday to That Absolutely Ridiculous Graeme Souness Backpass Against Dynamo Kiev in the European Cup pic.twitter.com/vaWgSNJkqg