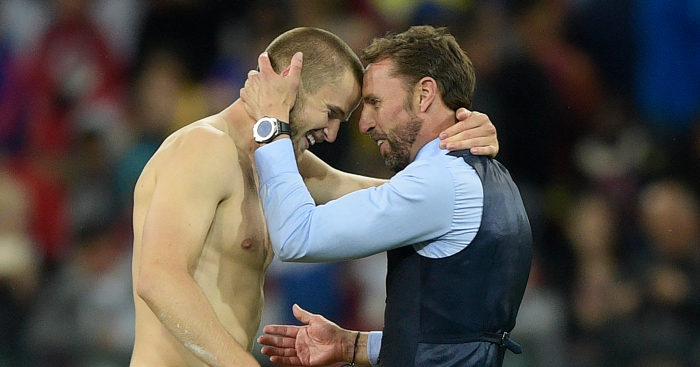 Tottenham, Everton and Manchester United players all grabbed our attention on day 20 of the World Cup.

England won their first knockout match for 12 years and their first World Cup penalty shootout ever against Colombia on Tuesday, and will face Sweden, who beat Switzerland 1-0, in the quarter-finals.

We’ve rounded up the best of the action on and off the pitch from day 20 of this fascinating World Cup.

Imagine having the nerve. We wouldn’t.

If only he was tall enough.

Not the only one of us who didn’t even have a clue how to celebrate.

Dier jumping right past everyone at the end 😂 #ENGCOL pic.twitter.com/RCMOLtJW7L

If the equaliser was cruel to any one man in particular, it was Pickford, coming straight after this wonder-save.

This is one of the saves of the World Cup by the way. England’s number one. pic.twitter.com/AP3XRpk4WQ

If any man deserved it.

We f*cking love them too, Ross.

What shape is your head Harry? pic.twitter.com/D8U96H0tAd

Dad, can you show me that photo of you guys running after reaching the quarter final?
-“Nah son pic.twitter.com/WbY5StQRLQ

😂 @chris_kammy trying to do a live interview on Sky Sports News in a pub full of England fans celebrating is 😂😂😂 pic.twitter.com/LuHfBDA4mU

At least England didn’t lose, otherwise it would have *all* been on Danny.

So we can at least all agree that this was Danny Murphy's fault. #ENGCOL pic.twitter.com/b6v0fR0Blv