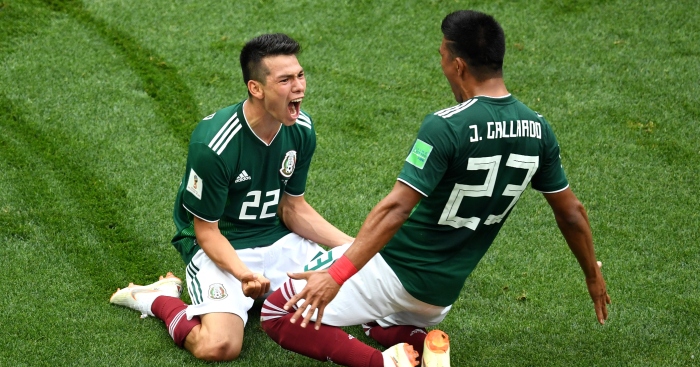 Former Manchester United and Tottenham men made some interesting comments on day four of the 2018 World Cup, while Mexico became the latest team to steal our hearts and Liverpool target Alisson entertained everyone by popping a massive balloon.

The Mexicans stunned the world by handing reigning champions Germany their first defeat in a World Cup opening match since 1982, winger Hirving Lozano netting the only goal of the game against a disjointed German side.

Meanwhile, Denmark fans celebrated, both Mexico and Panama managers had their say, and one particular Brazil fan won the World Cup of outfits.

For their match against Peru on Saturday evening, Denmark opened up their national stadium for supporters to watch the game on a huge screen. This is the moment they scored their winner.

“One day after training, Cristiano took 20 balls and started practising free kicks, but none went in,” he said.

Let me tell you about @Cristiano & his free kicks: “this is the way i do it” 😜 #Ronaldo #PORESP #WorldCup pic.twitter.com/sCvyDf0LQE

We were very ready for this to go in. We love him.

Imagine being sooooo good looking that your Instagram followers go from from 30,000 to 207,000 by playing 30 minutes at the World Cup. Take a bow, Rúrik Gíslason #fyririsland pic.twitter.com/Xr9uLRkoCk

Are you OK, mate?

OK, nothing to do with this World Cup, but this is weird and bloody brilliant.

Strange but true. To enter the 1954 World Cup you had to fill in this form, and then borrow a set of crayons to colour in your national team shirt. pic.twitter.com/LyvvMM8UOe

If Liverpool are signing the goalkeeper for his balloon-popping skills, they’re a few years too late…

We can’t stop watching this version.

GIF of the day pic.twitter.com/eFm4aQg26E

This is a great line.

Good line from #MEX coach Osorio in post-match press conference: "I told them to play for the love of winning and not the fear of losing."

Meanwhile, Panama’s manager was saying this…

Panamá's coach: "If we make it past the group stage, I'll drink two bottles of vodka by myself" https://t.co/u2ZZkvrBQu

"Time to live your childhood dreams"

A look at tomorrow's front cover of The Game pull out as England prepare to kick off their World Cup campaign against Tunisia #WorldCup #tomorrowspaperstoday pic.twitter.com/HOOuXwOukt

But ultimately, everything on Sunday was overshadowed by this Brazil fan, dressed as a Panini sticker. Brilliant.