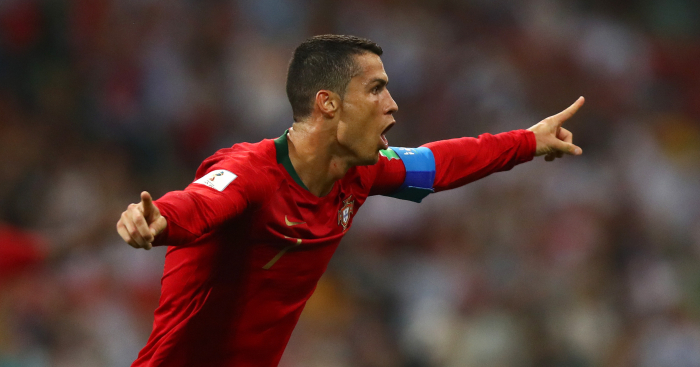 The second day at the 2018 World Cup produced one of the most stunning matches in the competition’s history, as Cristiano Ronaldo scored a hat-trick in a 3-3 draw between Spain and Portugal.

Ronaldo hit a stunning late free-kick to earn a draw for his side in a thrilling encounter, with Real Madrid team-mate Nacho also scoring a fantastic goal.

We’ve rounded up everything you need to see from day two in Russia, also featuring Kevin De Bruyne, Marcus Rashford and chickens.

We don’t necessarily want this to be a love in for that bloody brilliant game on Friday night, but let’s not ignore the bloody brilliance on show. We’ll start with that belting free-kick from the man in form.

🇧🇷 Clovis Fernandes followed Brazil for 7 consecutive World Cups from 1990 to 2014, but passed away from cancer in 2015 😢

🇷🇺 His 2 sons Frank and Gostavo, are at the 2018 #WorldCup to continue his legacy.

The Manchester City man put in this massive tackle on Adnan Januzaj in Belgium training.

The cleanest strike you’ve ever seen?

The two former England midfielders were made to eat Russian food. Jermaine cannot hack it.

This look at Real team-mate Nacho, after he conceded a penalty to the Portugal captain, is incredible.

Rashford returned to training after a few days away gave England fans a bit of a scare. Bring it home, Marcus.

Don’t embarrass yourself by trying something you can’t do at a World Cup when everyone is watching.

This is footage of a school in Uruguay, after Jose Gimenez’s late winner against Egypt. Just brilliant.

Every school in Uruguay are cancelling classes to watch the national team in the World Cup.

Here's footage from one school in Montevideo when Giménez scored the last minute winner today. pic.twitter.com/8Jd7uHWlzz

Nigerian supporters have unfortunately been banned from taking their lucky charms into the stadia at the World Cup.

This clip just highlights the contrasting emotions of a last minute winner.

A great move, a great strike, a great save. Lovely. Well done to all of football.