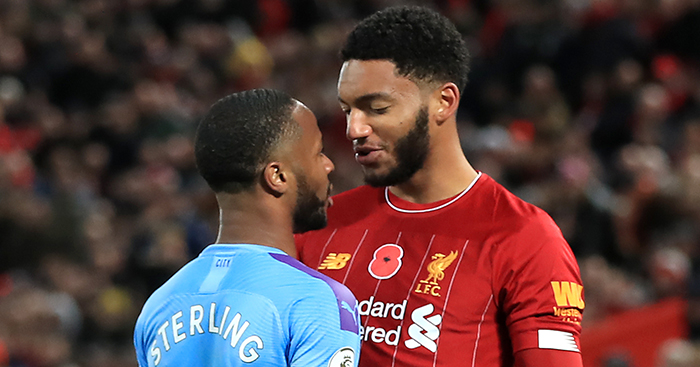 Liverpool struck a big blow in the Premier League title race at the weekend, and there was plenty of brilliant action around the world too.

Liverpool are now eight points clear going into the international break and will fancy their chances of finally winning the title this season even at this early stage, while silverware was actually lifted in the US as Seattle Sounders won the MLS Cup. But, as always, it was some of the alternative moments we enjoyed most.

Here’s just a selection of the things that made us smile over the weekend.

Forget all the great football, we mainly loved all the little kick-offs that kept happening. Joe Gomez nearly picking up Raheem Sterling was a particular highlight.

Forget the sitter he missed and just look at this pace. He also pulled off an elastico nutmeg FFS.

Rashford’s run from own box. Shows hunger and elite speed. These things don’t get highlighted enough. Sometimes he’ll miss sitters, but this is what you want to see from a united player. from r/reddevils

Another two free-kicks as part of a 25-man hat-trick. Just a normal day for Messi.

He’s now scored in the first 11 games of the Bundesliga season, grabbing two more in a 4-0 win over Dortmund to make it 16 already and break Gerd Muller’s 50-year record.

His touch isn’t bad either.

Hertha marked the 30th anniversary of the fall of the Berlin Wall in tremendous style.

We’re a bit annoyed the keeper didn’t jump, but still…

⚽️ Cliftonville defender Conor McDermott scores from his own half! 🙌

The weekend of the long ranger.

And we thought Rashford’s was good.

The funniest red card we’ve seen in ages, and a brilliant melee. Make sure you watch the replay.

The Blues move up to second in the Premier League table 👀 pic.twitter.com/RvjZYxdHWN

It’s not just the forwards who are standing out.

This is great news for our Football Index portfolio.

Erling Håland has just scored his sixth hat-trick of the season! He has scored 35 goals in his last 21 competitive apprearances! https://t.co/BfKEL7ZRTb