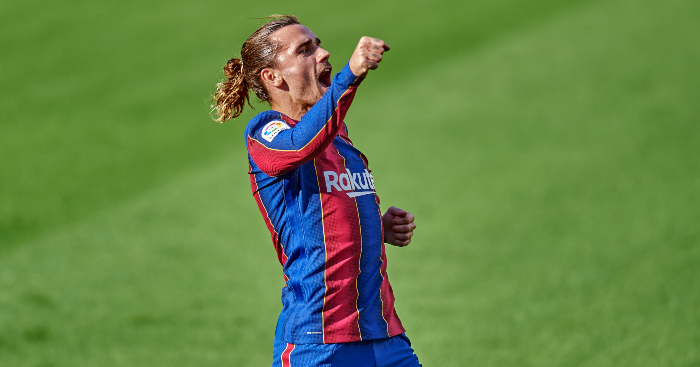 Lionel Messi and Lorenzo Insigne led the tributes to Diego Maradona as Europe’s domestic leagues held fixtures for the first time since the Argentina icon’s death this weekend.

On an emotional weekend, Barcelona, Napoli and Sevilla all recorded victories as they paid tribute to their former star Maradona.

What’s not to love?

Oh my word…MAGIC from Messi! 🔥

And he celebrates by revealing a Maradona Newell's Old Boys jersey under his Barca shirt ❤️ pic.twitter.com/Swreif0daf

On the topic of fitting tributes to Diego…

What a way for Napoli's captain and local hero to pay tribute to Maradona 🙌 pic.twitter.com/O2fKqdwaxu

This registered on the Yeboah-scale. His daughter’s reaction was priceless.

Antoine Griezmann with the sweetest of volley’s. Pick that one out 🤩 pic.twitter.com/lfrj4jmiFt

The crime thriller we all need to see.

“Did the lab find anything out about the prints?”

Thomas Müller knows about those windy nights in Stoke 😅 pic.twitter.com/hT5GgcEHXD

The Spaniard has been introduced to cricket.

I don’t get it 😕 pic.twitter.com/8Pq2tjlKQP

Give him a sight on goal, and he'll score it. 😎

A cracking finish from Lewandowski gives Bayern the lead going into the break! 👏 pic.twitter.com/fEpCOWffiZ

The Magic Of The Cup™.

The very non-league football team at the end of my road, @MarineAFC, has somehow made it to the third round of the FA Cup and their goalkeeper has just returned to the ground from the local Coop with drinks to celebrate. pic.twitter.com/UC0rpEUjFe

File this one under ‘victory songs we didn’t expect to hear’.

Not the best time to have a national powercut.

Tell us what you really think, Jurgen.

Bordeaux are the only team to have ever gone on a longer run without a clean sheet in Europe’s top five leagues (42 – in 1960).

FT | Bologna 1-0 Crotone: Mihajlović’s men have kept their first clean sheet in over 14 months – that’s 41 league games since their previous one.