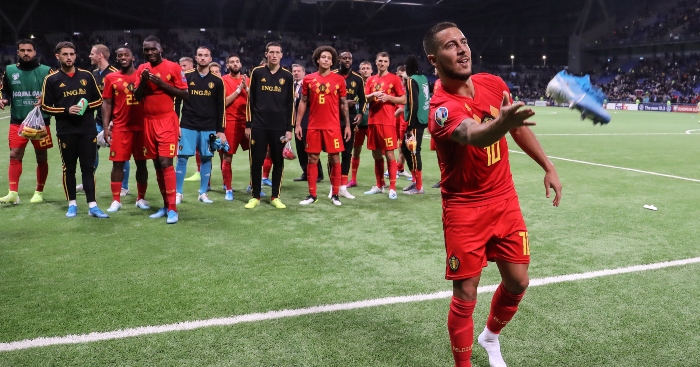 As top-flight club football took a back step, a host of big-name players made their mark for the respective international sides this weekend.

There was also an incredibly enjoyable fixture at Ibrox, as Liverpool Legends beat Rangers Legends 3-2, with Steven Gerrard appearing for both sides.

Great goal. Georginio Wijnaldum blasts one into the top corner for Netherlands vs Belarus. His second of the game. pic.twitter.com/UAipkAHBI3

Spare a thought for Ivan Rakitic.

Sure, Thomas Meunier gets the goal, but that pass from Hazard. Woof.

He looks slightly embarrassed to have done this against San Marino, but he shouldn’t.

Nutmegs Sergio Ramos, gets fouled. Real Madrid training should be fun next season.

The Italy team's visit to a children's hospital was so important to two-time cancer survivor @Acerbi_Fra that he was willing to miss the team bus 💙 pic.twitter.com/xSe0lonN58

The celebration made us so happy.

You know the rest…

This is how to announce Claudio Ranieri as your manager.

Just the hat-trick of worldie saves.

Whatever sport he plays, he still can’t be beaten.

Petr Cech is the only goalkeeper to save a penalty in the Champions League final and the National Ice Hockey League South 2. Probably. https://t.co/dKiugLtqgX

A compilation of his greatest first touches, for no other reason than it’s absolutely beautiful.

Watch: All the goals as Liverpool Legends beat Rangers Legends 3-2