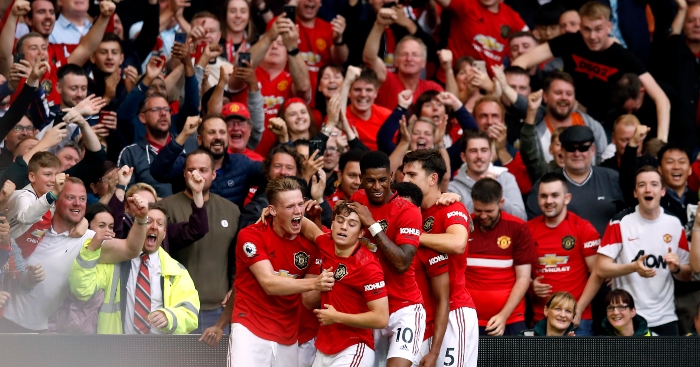 Premier League football returned with a bang as Manchester United beat Chelsea 4-0 at Old Trafford in Frank Lampard’s first competitive game in charge of the Blues.

Elsewhere, Manchester City and Liverpool picked up where they left off last season and there was plenty of other exciting action around the world.

Dan James' father passed away a few weeks before he joined Man United. He dedicated his first goal to him ❤️ pic.twitter.com/5PxDJw4y0U

Not a bad debut.

Helps Man Utd keep their 1st clean sheet in 16 games in all comps since February pic.twitter.com/v3iYFR97Oy

Benfica took full advantage of Porto falling to defeat at the hands of Gil Vicente by thumping Paços de Ferreira 5-0.

19-year old Nuno Tavares grabbed one of the goals on his league debut for the Benfica senior team – and what a beauty it was! pic.twitter.com/rYzkW9xEB4

WHAT THE WHAT! THEO BAIR, ARE YOU KIDDING US!? 😱 #PORvVAN pic.twitter.com/qILUu94rgO

Donny: "Of course I did, I like to hear that, it's better than them signing 'Donny fuck off, Donny fuck off."

Own goal of the weekend from Fernández Vial against Deportes Recoleta in the Chilean Segunda División pic.twitter.com/7JjC1OColc

The ref’s face is a sight to behold.

The Porto keeper is taking the piss here.

Good touch for a big man.

It’s nice to see one of the Football League’s greatest goalscorers get his day in the sun.

Hi Craig, remember this tweet back in 2014… I always remember it to this day. Ironically your a Villa fan who I made my debut with! Never tell anyone they can’t achieve something 👍🏻 @CraigTa90961607 pic.twitter.com/smCgi0VSlO