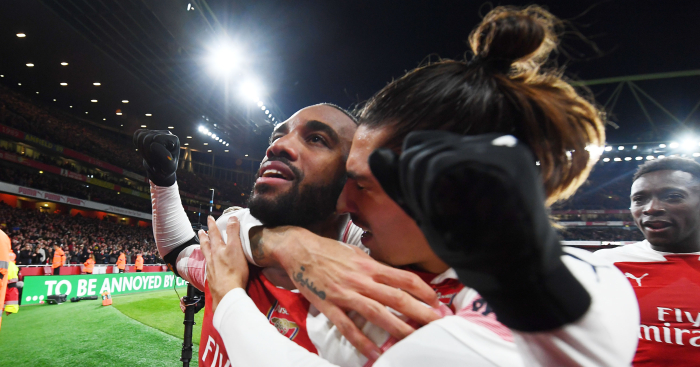 Arsenal, Manchester City, Chelsea and Leeds United men all caught our eye in action this weekend.

Liverpool’s trip to Arsenal was the headline fixture in the Premier League, but there were plenty of notable storylines around the world.

The black armbands Arsenal will wear this evening. pic.twitter.com/1YmYRqVIPC

The striker is unstoppable right now.

A fitting way to end a six-goal thriller between Real Betis and Celta Vigo. The stunned reaction of the goalkeeper sums it all up.

A second stoppage-time winner in the space of the week for the defender as AC Milan won 1-0 at Udinese with an incredibly FIFA goal.

Words can’t describe how much we love this own goal. And the striker’s smirk at the end.

He’s been quite good, has Sergio.

A 6-1 win and even more super slick football. And then there’s this penalty box scramble.

A good weekend for the Hazard family.

Pretty unique. Three brothers involved in a goal in the same weekend in a top 10 league:

A volley will never not be pleasing.

We felt sorry for Josh Windass at this point.

Just saw this from Leeds players. Any team/individual from any club take a look. This is what you call desire if you are unsure what the meaning is. Brilliant 👌👌 pic.twitter.com/X2XiuL68AT

The Holland legend announced his retirement this weekend and we got a little bit sad. We still absolutely love him.

Rafael van der Vaart announces his immediate retirement from professional football. Here’s the goal that made him one of my childhood heroes. pic.twitter.com/lfK5EXhLdQ

Despite Yeovil losing 2-1 at Morecambe, one visiting supporter left with a classy touch.

Big thanks to the @YTFC supporter who went round after the game and picked up all the litter from the away section. 👏👏👏

Reiss Nelson & another reason to get excited about Arsenal’s evolution