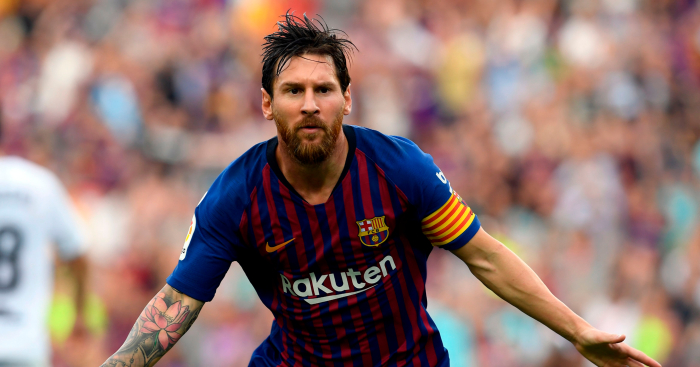 In the final weekend of fixtures before the first international break of the new season, Watford caused the biggest surprise in the Premier League, beating Tottenham to maintain their 100% start to the campaign.

We’ve rounded up the best of the action on and off the pitch from all around the world.

Our favourite moment of the season, hands down.

Only went and married my true love yesterday pic.twitter.com/Vtzq1AZpRY

Never not wonderful to watch.

Barcelona are fun, who knew?

As ridiculous as ever.

Two goals for the Manchester United striker saw him reach a remarkable landmark.

Quite remarkable that Romelu Lukaku has scored as many Premier League goals (104) as Didier Drogba managed throughout his career. Lukaku’s 25-years-old.

We’re going to buy Olimpija Ljubljana shirts with Lupeta’s name on the back now.

He scored directly from a corner and meant it. Fair play.

The pass, the touch, the finish. Yes. We’ll forget the red card.

Goal. Of. The. Season. Take a bow Fabio Quagliarella! 🔥🔥🔥 pic.twitter.com/yUjmPNEs74

There’s a lot to like about Watford so far this season.

This is beautiful from Pereyra. What a guy. Made that lads day clearly. It’s the little things 🐝 pic.twitter.com/sL9vjlyIAw

We say it a lot about Athletico Mince, but if you know, you know.

Steve McClaren’s song about how he picks the QPR team

Watch: Aubameyang and Lacazette show off their bromance again