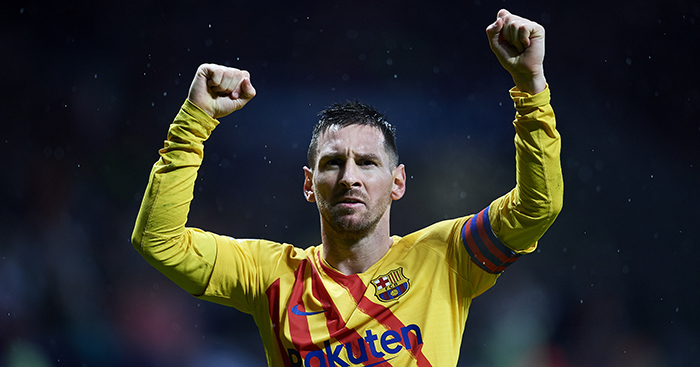 Liverpool strengthened their position at the Premier League summit over the weekend, but things are a lot more competitive at the top end of some of the other major leagues.

Barcelona needed a late winner from Lionel Messi – who else? – to stay ahead of Real Madrid on goal difference in La Liga, while Inter Milan capitalised on Juventus’ home draw against Sassuolo to move a point clear at the top of Serie A.

And, as always, there was plenty of action that caught our eye away from the showpiece fixtures too…

Not of this world.

You’ve got to love a dink.

Another two goals took him to 13 for the season. Romelu Lukaku has got 11. Inter are flying.

Skip to 42 seconds. He’s turning into one hell of a player.

We don’t care it’s for the reserves. This free-kick is sexy AF.

Huntelaar brought up his 150th goal for Ajax with this beauty, becoming the first player to reach that landmark since Marco van Basten in 1987.

The first player to score a hat-trick on their league debut for Ajax in 60 years. And a fine bit of comedy to set it up.

We’ll never get tired of Mane copying his team-mates’ celebrations.

Jack Grealish is dead good. Pass it on.

Jack Grealish has been directly involved in seven goals this season.

That's more than any other English midfielder in the Premier League.

In this week’s episode of Polish Ekstraklasa fun, we’re left wondering just what on earth are this guy’s knees made out of?

Watch: Bernd Leno makes stunning save to rescue a point for Arsenal