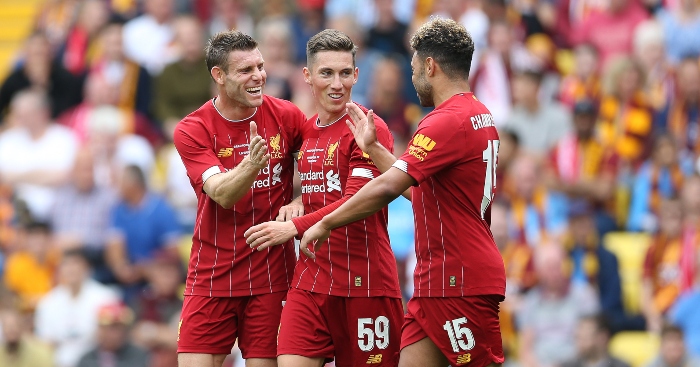 As teams begin to step up their pre-season preparations, Liverpool, Rangers and Real Madrid were all involved in action this weekend.

Elsewhere, there were two dramatic semi-finals in the AFCON and MLS was as entertaining as ever.

We’ve rounded up the best of the action on and off the pitch from around the world.

Stephen Darby and @chrisrimmerMND. A true inspiration to all.

Today was about much more than football. ❤️ pic.twitter.com/398kB9iNY2

We could talk about how much we love Milner all day, and we’d be justified in doing so.

Shout out to the Nigeria defender that tried to stop Mahrez from shooting under the wall, and the commentator in tears.

We told you MLS is like English football in the 1990s, and now Seattle Sounders have a striker turning into Paul Gascoigne.

The 18-year-old has been catching the eye in training with Real Madrid’s first team. Just don’t call him the Japanese Messi.

To add some context to this, Fort Boyard is a TV show in which Rami participated in ‘slime wrestling’ while supposedly injured. Fair play, Adil.

Adil Rami is alleged to have skipped Marseille training in May to participate in TV show Fort Boyard, claiming instead to Rudi Garcia that he had to go to Paris for "family reasons" (LaP) https://t.co/f5hYfSy9Vl

The goalkeeper had already saved three penalties before stepping up to score the winner as Club America won the Campeon de Campeones.

Scoring an own-goal in extra-time to lose a semi-final is pretty heartbreaking. But also quite funny for the other team.

Defoe scored Rangers’ fourth in their 4-0 win over Marseille, and absolutely nothing about this sentence seems to make any sense.

Ajax are taking the piss, here.

On the topic of excellent team goals, New York City were beaten in their derby but did score this.

We’re not sure what Lugano did to make Inter so angry.