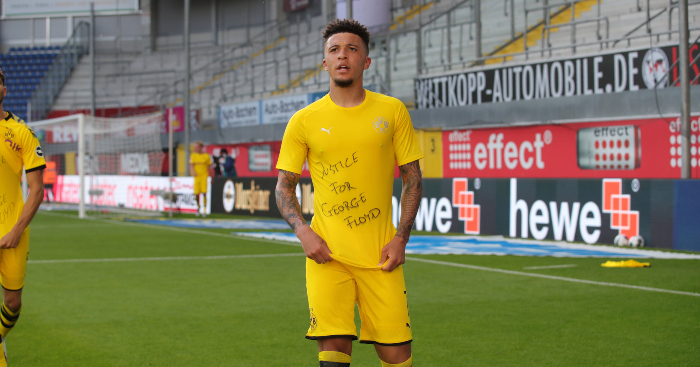 Jadon Sancho proved the hero of the weekend in the Bundesliga as he paid tribute to George Floyd while celebrating one of his three goals in Borussia Dortmund’s 6-1 thrashing of Paderborn.

Using his platform for good.

To be able to use my platform to bring attention to a problem that has been going on to long feels good!!! We have to stand up for what we believe in and I believe that it is time that we are heard! #justiceforgeorgefloyd #saynotoracism pic.twitter.com/TRB1AGm0Qx

Does anyone else just feel quite proud of him?

First professional hat trick 🙏🏼. A bittersweet moment personally as there are more important things going on in the world today that we must address and help make a change. We have to come together as one & fight for justice. We are stronger together! ❤️ #JusticeForGeorgeFloyd 🙏🏼 pic.twitter.com/ntOtwOySCO

What a bloody goal that is.

Leonardo Bittencourt, that is special 🎯👏

A massive goal for Werder Bremen's battle to avoid the drop!

Schalke are in free fall… pic.twitter.com/bT4wFpWdAh

That touch deserves celebrating in itself.

We absolutely love goals where a player dinks the ball over an incoming tackle before finishing, so shout-out to Javairo Dilrosun for this.

Guided beautifully into the bottom corner 🎯

Plea deserved that one! 🙌

2️⃣ assists and a goal. Not a bad afternoon that… pic.twitter.com/7s02C5nQfV

His season gets sillier and sillier.

We’ve added a similar amount of body mass during lockdown, sadly we were told we looked “a bit chubby Pete Doherty”.

So, what did you get up to in lockdown?@leongoretzka_: pic.twitter.com/vZ31lkJ7K3

We’re very excited to see him back fully fit and firing.

This pass from Marcus Rashford in training 😍 pic.twitter.com/CtoxRFhUSM

When you try your best to wait to pick a pass…

Fremad Amager (1) – 0 Kolding IF – Reda Rabei spots the GK out and hits it from the middle! from r/soccer

Socially-distanced trophy lifts look like something from a cult.

We’re quite into this tbh.

Fluminense have announced the return of, erm, *Fred* with a Twitter video that would make you think they've signed Gabriel Batistuta…pic.twitter.com/wSv772lCzh