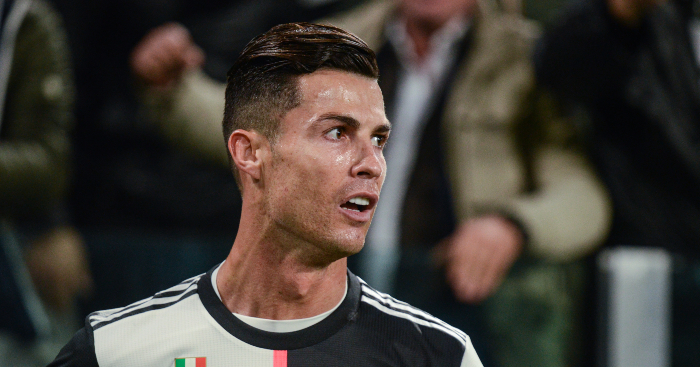 Liverpool’s trip to Manchester United was the headline event in European football this weekend, with both sides having to settle for a point in the 1-1 draw at Old Trafford.

Elsewhere, Gianluigi Buffon rolled back the years for Juventus and Luis Suarez reached another landmark for Barcelona.

Not the most popular man in Old Trafford, it seems.

These United fans weren't so welcoming after giving Ox shit when he was warming up 😂😂😂😂😂😂😂 pic.twitter.com/wXs3nN00cy

🚨 GOAL OF THE SEASON CONTENDER! 🚨

⚽ He wasn't going to stop at 700 goals! No. 701 brings Cristiano Ronaldo level with Gerd Müller!

💥 Ronaldo shows quick feet and hammers one home at the near post to give Juventus a 1-0 lead over Bologna pic.twitter.com/HyyWyJ91m0

Juve needed the old man to secure the points, though.

🔝 @LuisSuarez9 matches the legendary Josep Samitier with his 184th goal for Barça.
🇺🇾 Puts him joint FOURTH on the all-time list! 👏 pic.twitter.com/ocoMCENVKe

Not a bad way to beat Real Madrid.

👏 Lago Junior's winner lifts them out of the drop zone and inflicts Real's first defeat of the season!pic.twitter.com/N4k61Ol3CV

A message of support for Accrington’s Billy Kee.

Ipswich town fans at Accrington today unfurled a banner in support of Accrington player Billy Kee who is struggling with depression and hasn't played all season.
Absolute full respect them! pic.twitter.com/WhytyI4KYx

You shall not pass.

We love this a lot.

The Magic of the Cup™

🏆GOAL CAM | Keeper @jules_alan with the injury time equaliser at @suttonunited to keep us in the hat for Monday’s @EmiratesFACup 1st Rd draw draw 🙌🏻 pic.twitter.com/t8TlKIqmj5

A lot of people often question my sanity in travelling 450 miles to watch Stoke City, today justified why I do
After an emotional week I returned to my seat today where a steward came up to me & said ‘The Chairman asked me to give you this’ and handed me the attached card pic.twitter.com/2bt4jULoap

We don’t know who this centre-back in Poland’s second tier is, but we like him.