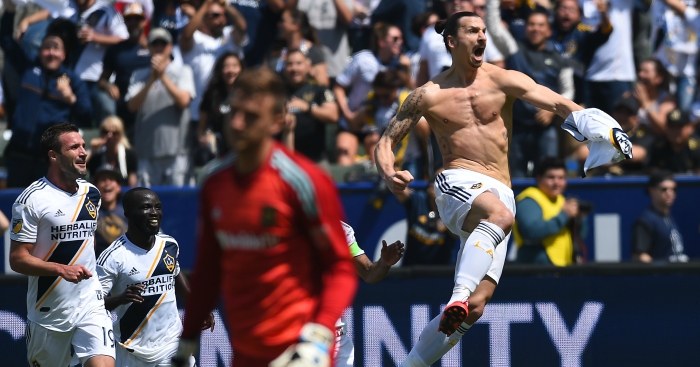 Arsenal, Tottenham and Liverpool players all caught our eye, while it was an eventful weekend for a former Manchester United star.

After club football had a brief hiatus during the international break, it returned with aplomb this weekend.

Chelsea vs Tottenham was the big fixture in England, but there was also the newest derby in world football, and that’s the only place to start.

It really wasn’t going to go any other way, was it?

Is there a footballer in the world who is a more fully formed cartoon character / superhero than Zlatan Ibrahimovic?

Is there a city in the world more suitable as a home to such a footballer character than LA?pic.twitter.com/cFeIVmrJXr

Barcelona were 2-0 down at Sevilla facing their first defeat in La Liga in 11 months when Messi was introduced from the bench on Saturday. He left it late, but what followed was inevitable. The commentator’s laugh is brilliant.

What Easter is all about… trying to find the perfect sized mini egg 🧐 #10mm #HappyEaster pic.twitter.com/oyiHW5ePLu

Macclesfield’s late win against Woking really did have it all.

Never turn your back on the game 🙈

This Woking defender could have been the hero… 😭 pic.twitter.com/bZGXV2nHvT

Needing two wins to clinch the Bundesliga title, Bayern came up against Borussia Dortmund in Der Klassiker and promptly thrashed them 6-0. Six-nil.

Bayern smashed Dortmund for SIX to close in on another Bundesliga title 🔥 pic.twitter.com/dVfaneEJLf

Let’s face it, players celebrating to wind up opposition fans is always great.

Wanker signs: 4
Middle fingers: 10 (including an ice-cold double from the lady)
The oddly out-of-favour V-signs: 2 pic.twitter.com/F9cgkCQfjC

Another two goals for Aubameyang against Stoke City, and he could have had a hat-trick but gave a late penalty to Alexandre Lacazaette instead.

5 – Pierre-Emerick Aubameyang has now scored five goals in the Premier League; the most by any Arsenal player in their first six appearances in the competition. Alive. pic.twitter.com/Ha3tfxFvSb

What is know in some circles as ‘a Maynor Figueroa’.

Ozil vs Stoke’s police service is one of the strangest rivalries of the season.

.@Policingstoke didn‘t help in the case of robbery last summer so we took matters into our own hands. 🕵🏼‍♂ Proud to announce we earned three hard fought points today for @TheIwobiEffect and all the other gunners 😉 #Banter pic.twitter.com/wVrFgPKeJh

The best assist you will see for a little while.

Nine years on from his last cap for England’s Under-21s, Wheater has finally given up on the dream of representing the Three Lions at senior level.

a tough decision but ive decided to retire from international football to prolong my club career. I wish the team all the best in the world cup #england @officialbwfc #bwfc

This well never not be a good stat.

What a f*cking goal from the 19-year-old.