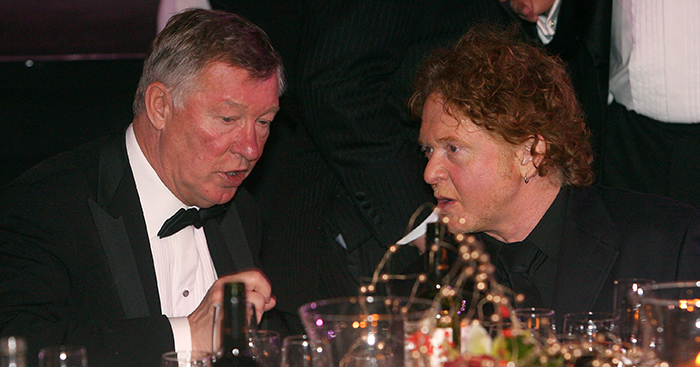 Footballers keep weird company. Starting with Joe Hart’s camaraderie with 50 Cent, these are some of our favourite weird footballer friendships.

Much as we like to bicker about it, football brings people together.

Some people get in fights over it, while some can’t even share a room with their rivals. At the end of the day, however, the beautiful game creates more friends than it does enemies.

Nowhere is that more apparent than the strange world of footballer-celebrity friendships.

Thought you’d never see Joe Hart hanging out with 50 Cent? Think again. Wonder how Graeme Souness and Dale Winton might have hit it off? Wonder no longer.

Here are some of our favourite unlikely footballer friendships.

While 50 Cent spends his days In Da Club, chest-thumping England hero Joe Hart can often be found in da goal.

That fundamental difference didn’t stop the pair striking up a connection when Hart visited the US a few years ago.

The rapper claimed that he and Hart “do it BIG”.

Me and my man Joe hart england and manchester city goalkeeper we do it BIG. #FRIGO #SMSAUDIO

Controversial midfielder Joey Barton spent much of his career talking about The Smiths, often quoting the band’s lyrics on Twitter.

Smiths singer Morrissey, meanwhile, has seemingly had Barton-like characters at the forefront of his mind most of his life. “It took a tattooed boy from Birkenhead to really really open her eyes,” he once sang.

A few years ago, Barton told The Sun: “If I could get The Smiths back together that would top anything I could achieve on the football pitch.”

That didn’t happen, but the former Man City player did eventually appear in a Morrissey music video.

It was as discomfiting as you might expect. Barton pushed Morrissey around in a wheelchair, providing a visual accompaniment to lyrics like “No emasculation, no castration; no highway, freeway, motorway”.

You may be surprised to learn Souness went to Winton’s funeral after he passed away in 2018, but the pair had formed an unlikely friendship many years ago.

So much so, in fact, that Souness was Winton’s best man for his (admittedly sham, just for TV) marriage to Nell McAndrew in 2003.

“We met in a restaurant in London and became great friends,” Souness told the BBC. “We used to see him on holiday in southern Spain when we all went there.”

It all allegedly started when Winton told Souness’ wife, ‘You’re gorgeous,’ before turning to Graeme and saying: ‘And so are you.’

Souness obviously isn’t the complete bastard he often comes across as on Sky Sports.

The free-kick master and TV swearer are great friends. Beckham, of course, captained the England national team, while Ramsay has captained a ‘Rest of World’ side for Soccer Aid.

But while the pair get on well, they don’t have any plans to become family.

“We’ve promised that none of our kids will date,” Ramsay said in 2017.

Premier League forwards often call Drake on his cellphone, late night when they need his love.

The ‘Hotline Bling’ superstar has, over the last few years, chewed the fat with the likes of Sergio Aguero, Mario Balotelli and Romelu Lukaku.

The most expensive footballer in the world is apparently good friends with Justin Bieber and Lewis Hamilton, which is interesting but not wholly surprising given how they’re all people a lot of people want to punch in the face. Not us, incidentally (well, not Neymar anyway).

What’s more surprising is Neymar’s apparent friendship with Floyd Mayweather, whose face you would never punch.

“Chelsea is my team,” Pietersen once confessed. “I am good friends with many players in Chelsea, including Frank Lampard, Ashley Cole and John Terry. I live in Chelsea and train there too.”

In 2013, the big-hitting batsman even urged Roman Abramovich to give Lampard a new contract. And he did!

#Lampard is a GUN! #fact

Simply Red singer Mick Hucknall claims to have slept with about a trillion women, while Pelé once starred in an infomercial about erectile dysfunction.

The two have apparently been friends since 1985.

This game is drab, so let's take a moment to remember that Pele and Mick Hucknall are inexplicably mates. pic.twitter.com/P3Ps81rAxF

Okay, there’s a Manchester connection. But isn’t it weird that Mick Hucknall has so many friends?

“He’s been on the training ground with the players a few times,” Ferguson told The Independent in 2008. “His footballing ability is basic, without potential. He knows his strength is singing.

“I know all his songs and I’ve got all his stuff on my iPod.”

The (not a) wheeler-dealer and Torchwood actor spent time together on I’m a Celebrity, striking up a deep, deep connection.

“We needed to get wood for the campfire so Harry and I went down to collect some wood and we had one of the loveliest talks I’ve had in a long time,” Barrowman said.

Watford captain Deeney met boxing superstar Joshua in a barber shop in Watford. Without knowing who Joshua was at the time, Deeney found he had plenty in common with his fellow sportsman.

“I’ve never claimed to be his best friend,” he later told The Mirror. “I’m just proud of what he’s achieved and I think we get on because our ­backgrounds are similar.

“We both grew up in an area where the ­distractions were all there. I made my mistakes and he did, too, when he was younger.”

If ever proof were needed that football and music don’t (or shouldn’t) mix, here it is.

Upsettingly, Brazilian legend Ronaldo is a big fan of Ed Sheeran, the very humble, very ordinary singer who wrote hits like ‘Shape of You’. [Ronaldo… shape… something… uh…]

Worse still, the World Cup winner apparently loves the Ipswich-born tryhard so much, he even learned a dance to one of his songs.

“I met Ronaldo and he came to my concert and invited us to his house which has a club in it,” Sheeran told the NME.

“We went there and he showed me my dance routine from the ‘Thinking Out Loud’ video. He had learned it with his girlfriend, which was amazing.”

We love you @teddysphotos ! #oursong #thinkingoutloud

OK, so these are all footballers. But we will still never understand how, when Meyler announced on Twitter he was playing Fortnite with some friends, these are the three that made up his squad.

Meyler and Clark make sense as international team-mates, and Meyler might know Rooney through his old Sunderland team-mate, but there is literally no logical explanation whatsoever as to how Pedro, the Spaniard living in London, somehow ended up playing online computer games with a couple of Irish lads who were at the time playing for Reading and Newcastle.

11 of football’s greatest ever headlines: Go on now Jo, walk out Kuffour