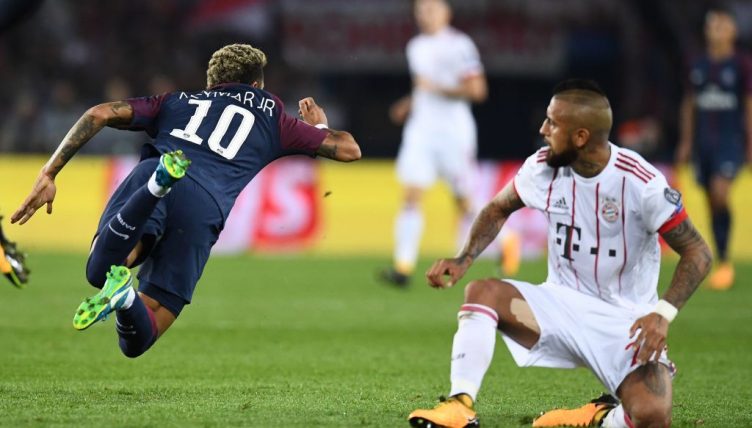 Sometimes you just can’t help but admire a piece of sh*thousing on a football field – and Arsenal, Chelsea and Manchester City players have all mastered the art in recent years.

For a player, to be a sh*thouse is to go beyond aggression commonly found in sport. It’s to unnecessarily rub salt in wounds, to go above and beyond just to get one over an opponent.

Here are some examples of unadulterated, first-class sh*thousery.

Adebayor was Arsenal’s top goalscorer in 2008-09, but he left the following summer to join Manchester City.

When the striker came up against his former side, he alleged the Arsenal supporters verbally abused him in the warm-up, and so reckoned running the entire length of the pitch to celebrate in front of them was justified.

“If you were to abuse a man in the street for over an hour he would react and it would be a worse reaction than a goal celebration,” he said.

Post-World Cup, Neymar found himself with a reputation that suggests he can be quite sulky when things don’t go his way.

In PSG’s game against Nimes, the world’s most expensive footballer scored from close range and ran up to a sign held by opposition supporters he spotted.

The sign labels the Brazilian a ‘crybaby’ so the 26-year-old proceeded to act like one in front of the opposition support.

This now famous moment between two cult heroes occurred in 1988. Gascoigne was just 20 when Jones, member of the FA Cup-winning ‘Crazy Gang’, grabbed him by the b*llocks after being told by his manager to man-mark the youngster.

The 2018 World Cup was mostly about great goals and magical moments. But it wouldn’t be a proper major international tournament without Pepe performing at least some sort of absolute sh*thousery.

After lunging in on Mehdi Benatia at a corner, the centre-back threw himself to ground when the Moroccan defender remonstrated. Classic Pepe.

The Chelsea loanee got in a tussle with Mexico’s Diego Lainez while playing for the USA.

Miazga, who stands at 6’3, decided to remind his opponent of the height difference between the two, not that it wasn’t glaringly obvious already.

“We got in their heads, they got a red card right after and you saw what happened. We took control and we won the game.”

When a penalty was given England’s way in the World Cup 2018 round-of-16 encounter against Columbia, players of the South American side started kicking and scuffing the penalty spot.

It didn’t help much. Harry Kane blasted the ball home and England came out eventual winners.

John Stones later branded Columbia “the dirtiest team” he had ever come across.

In a case of double-sh*thousery, in the 2002 World Cup, Turkish player Hakan Unsal whacked the ball at Rivaldo, who was waiting to take a corner.

The attacker then hit the floor clutching his face. Unsal was sent off, Turkey were knocked out, and Brazil went on to win their fifth World Cup.

The current Fleetwood Town manager tried to deflate Zlatan Ibrahimović’s ego by mocking the size of the Swede’s nose.

We doubt it did much to hamper the former Inter Milan striker’s spirits, however.

The midfielder showed his bare arse to Everton supporters after Manchester City’s match against the Toffees.

The FA charged the footballer, but their decision came under scrutiny from such figures as Graham Taylor, who suggested it was just a bit cheeky.

When a Tottenham fan quite enthusiastically threw the ball Pires’ way, the Frenchman gave as good as he got with his feint.

After Manchester United full-back Rafael took a swipe at Luiz by the corner flag, the defender went to ground but perhaps made a tad much of it.

His cheeky grin afterwards certainly suggests that was the case.

Luiz later dedicated his smirk to the Manchester United fans who called him “Sideshow Bob”.

Back in 2013, in his inaugural season for the Blues, Eden Hazard was sent off when he kicked Swansea ball boy Morgan – albeit quite lightly.

Rolling around on the floor, apparently injured, the youngster played a blinder in getting Chelsea’s star man sent off as the Swans triumphed in the League Cup semi-finals. 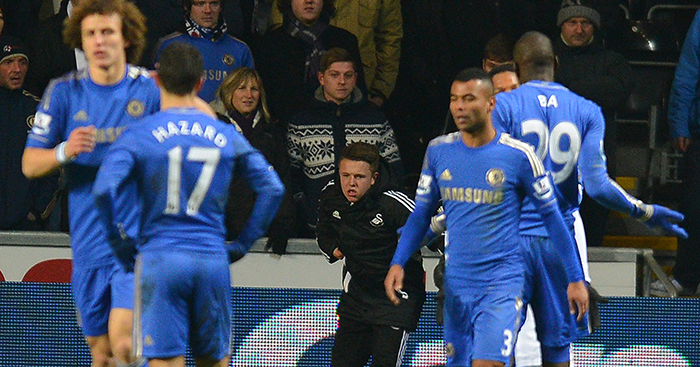 Danny Mills had been point-scoring the entire game in Middlesbrough’s match against Arsenal so it must’ve been a great satisfaction for Henry when he turned the defender inside out, flicking the ball between the defender’s legs.

It was the Battle of Old Trafford in September 2003. In one of the many interesting moments of the game, Arsenal defender Keown found great joy at the expense of Ruud van Nistelrooy after the Dutchman missed a controversially-awarded penalty.

Watch: Chelsea loanee takes p*ss out of Mexico player for being short