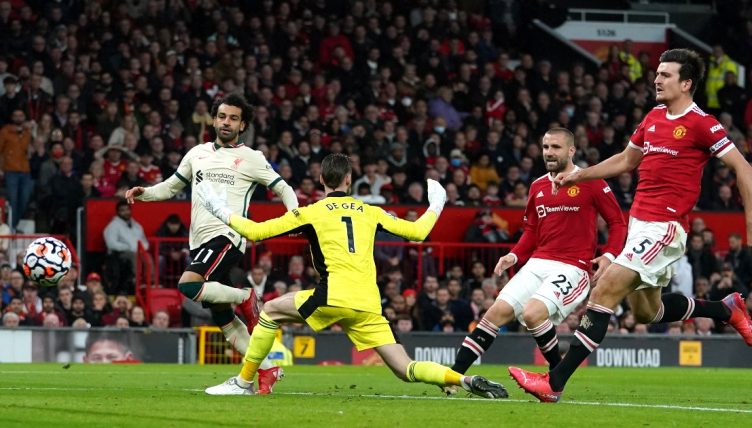 Liverpool were firm favourites going into their clash with Manchester United on Sunday afternoon, and they lived up to the hype with one of the biggest wins in their history.

Mohamed Salah continued his stunning start to the season with a hat-trick in Liverpool’s 5-0 win at Old Trafford, a result that keeps them within a point of league leaders Chelsea. United, meanwhile, sit seventh, seven points off their historic rivals.

“This is a huge result. Not just the scoreline, but to actually come here and win for Liverpool…” former Reds centre-half Jamie Carragher said from the Sky Sports commentary box.

“There were a lot of people who didn’t really fancy Liverpool to win the league this season. They’ve played two of their rivals at home [Chelsea and Man City] and have not got the three points, so I thought it was a really big game for Liverpool to get the three points on the way here today.

“It really cements them alongside Chelsea and Manchester City as the three teams who are really going to contest this title.”

Here are 15 of the most outstanding stats and records from Liverpool’s stunning 5-0 victory.

– Salah is the first-ever player to score a hat-trick away at Manchester United in the history of the Premier League. The last player to score three at Old Trafford in the league was QPR’s Dennis Bailey on New Year’s Day 1992.

– The Egypt international is the first player to score a hat-trick away at Manchester United in any competition since Ronaldo’s legendary performance for Real Madrid in April 2003.

– Liverpool are the first club to score two hat-tricks in the Premier League against Manchester United. The other was Dirk Kuyt’s in March 2011.

– Salah has now surpassed Didier Drogba as the Premier League’s top-scoring African player, and extended his record-breaking run to 10 successive games in all competitions.

– The seven cards shown to United (six yellows, one red) was their joint-most in any Premier League match in history, alongside Tottenham (February 2008) and Chelsea (September 2008).

– Liverpool have scored three or more goals in all eight of their away games this season (30 in total).

– The match was the first time Manchester United ever went into half-time four goals behind in Premier League history.

– This was Liverpool’s biggest ever victory away to Manchester United.

5 – Liverpool are only the second team in English top-flight history to win consecutive away games by a margin of 5+ goals without conceding themselves, after Manchester United in February/March 1960. Special. pic.twitter.com/KhAsC0q8jt

– After Paul Pogba’s sending off in the 61st minute, Jordan Henderson completed 84 passes. United completed 56 collectively. Liverpool’s possession over that period was 83%.

– Mason Greenwood registered just 19 touches before he was brought off at half-time. By contrast, Roberto Firmino registered 32 over the same period.