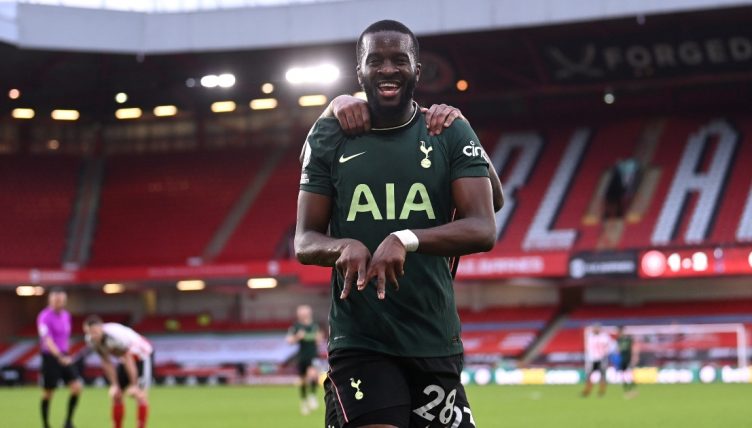 The Premier League recently announced their nominees for the 2020-21 goal of the season award, but we think they have snubbed far too many worldies.

Nominees included Manuel Lanzini’s last-minute equaliser against Tottenham, Edinson Cavani for his perfect chip against Fulham, and James Maddison’s rocket against Manchester City back in September.

But there are so many other goals that deserve as much, if not more, acclaim. We take a look at 15 that should be shouted about until the end of the Earth… or until next season.

The midfielder endured a mixed time under Jose Mourinho but he probably scored the best goal of the Portuguese’s tenure at the club.

Spurs travelled to struggling Sheffield United in January with their top-four hopes still well intact and, with his side already 2-1 to the good at Bramall Lane, the French midfielder helped secure all three points.

Ndombele flicked a brilliant first-time effort over a despairing Aaron Ramsdale and into the bottom corner, from what looked like an impossible angle. Pure filth.

The blow of a frustrating season for Arsenal fans was softened by the emergence of Kieran Tierney as the Gunners’ latest hero.

His season peaked with this superb solo effort away to West Brom, and the fact he did it in the snow makes the goal even better. Sorry, we don’t make the rules.

Scotland's Kieran Tierney won Arsenal's goal of the month award for January with this solo effort against West Brom 🚀pic.twitter.com/5SqgBIZyQc

Spurs were 2-1 ahead against Crystal Palace when Kane stepped up with his usual brilliance.

Some neat build-up play from the home side eventually saw Matt Doherty lay the ball back to the Golden Boot winner on the edge of the area.

Without a moments thought, or even a look at the goal, he swept an unstoppable strike into the top-left corner. Poor Vicente Guaita never stood a chance.

Spurs were impressive on the attack against Crystal Palace.pic.twitter.com/uThHl95vKK

It is no big surprise to see the other Spurs talisman gracing this list, is it?

The fact Son’s strike came in a North London Derby may just give it the edge over Kane’s as well. Picking up a through ball from his partner on the halfway line, the South Korean was allowed to run to the edge of Arsenal’s penalty area.

A quick jink inside and he picked his spot, arching a beautiful shot into the far corner. Bernd Leno dived for it, but it was more out of hope than expectation we suspect.

Perhaps more well known for his deliveries into the box, the winger broadened his repertoire against Everton at Goodison Park, bending an absolute beauty in off the post. After he’d left Allan chasing shadows, of course.

You can bet plenty of clubs are furious with themselves for not making a move for Eze in the summer of 2020.

The versatile attacker has been a revelation for Crystal Palace since moving across London from QPR, entertaining fans from afar with some outrageous skills and brilliant goals.

Those goals peaked against Sheffield United when he set off on a mazy run from inside his own half, rounding it off with a clever early finish, bent round the side of a defender. By the time Ramsdale saw it, there was nothing to be done.

🤩 Ebere Eze's goal vs. Sheffield United has been nominated for the January @PremierLeague Goal of the Month!

How this missed the cut for the nominees is completely beyond us.

For much of his first season in England, the Spaniard has had to settle for being a bit-part player as Pep Guardiola guided his side to a third league title of his tenure.

But he was thrown into the starting XI for the trip to Newcastle in May, marking the occasion with a hat-trick. But an audacious back-heeled volley was undoubtedly the pick of the bunch.

Official: Ferran Torres vs Newcastle has been named as #ManCity’s Goal of the Season.pic.twitter.com/Jsp3FSncSh

Did you really think we were going to leave this out?

A last-minute winner from a goalkeeper is always likely to find its way onto a list like this because of the sheer novelty of it all, but Alisson’s header was genuinely fantastic.

The Brazilian darted to the near-post with all the instincts of a top striker, before flicking a perfect header past Sam Johnstone in the West Brom goal. An iconic moment.

THAT @AlissonBecker header has won our Goal of the Season vote! 👏⚽ pic.twitter.com/2ZFTZMfkpM

There are few more likeable strikers in the Premier League than Welbeck and he becomes all the more likeable when he starts embarrassing defenders like this.

Leeds United fans may disagree, however.

It has been an alright season for the 21-year-old, ending the campaign with a Champions League winner’s medal and a place in the England squad for the Euros.

After playing regularly in the previous campaign, 2020-21 was always likely to be a big one for James. But no one expected him to announce himself as emphatically as he did.

On the opening day of the season, he took it upon himself to unload an absolute rocket into the top corner against Brighton from nearly 30-yards. Save one for the summer, Reece!

So good! 🚀@reecejames_24's stunning strike against Brighton has been named as Chelsea’s September Goal of the Month! 👏 pic.twitter.com/NL5luVkkYm

Thomas left it late in the season to score his first goal for the club, but it was well worth the wait.

Forced into the starting XI thanks to a nasty James Justin injury, the left-back played a huge role in the Foxes first ever FA Cup triumph. More importantly, however, he scored this impeccable volley against Manchester United a few days earlier.

Luke Thomas with an inch-perfect strike into the top corner to give Leicester the lead!

Vardy was doing what he has always done at the start of the season: scoring a lot of goals against one of the ‘big six’.

A hat-trick against Manchester City helped Brendan Rodgers’ men to a 5-2 victory and it was his second that really caught the eye.

A slick one-two between Youri Tielemans and Timothy Castagne allowed the fullback the chance to cross and, of course, Vardy was there to convert with a brilliant backheeled flick.

After an impressive couple of seasons back in the top-flight, Wolves fans will have been left bitterly disappointed with how the 2020-21 campaign played out.

But one undoubted highlight was a 2-1 win against Arsenal at Molineux and we were treated to the rare sight of Joao Moutinho’s name on the scoresheet. And what a strike it was.

After Ruben Neves equalised from the spot at the end of the first-half, Moutinho fired them in front, his sublime strike cannoning in off the post from 25-yards out. Unstoppable.

🚀 What a beauty from Joao Moutinho to give Wolves the lead against Arsenal. pic.twitter.com/106Nb6QuTX#WWFC | #Wolves

It is safe to say that Bamford surpassed pretty much everybody’s expectations this season.

The striker continues to go from strength to strength under Marcelo Bielsa and finished his first Leeds United campaign back in the top flight with 17 goals and eight assists.

His finest hour came at Villa Park, where he netted a hat-trick, including this exquisite finish to polish off a simply wonderful move.

What a great team goal from Leeds though 🤤pic.twitter.com/lTNY8KjHpQ

Foden progressed from being ‘the next big thing’ to just being the big thing this season.

Guardiola continued to put more and more faith in the England international as the campaign wore on and he proved pivotal in the club’s run to the Champions League final.

But his finest strike came in the Premier League in an emphatic win against Liverpool at Anfield. A perfect first touch, a slick dribble and a rocket of a finish. What a goal.