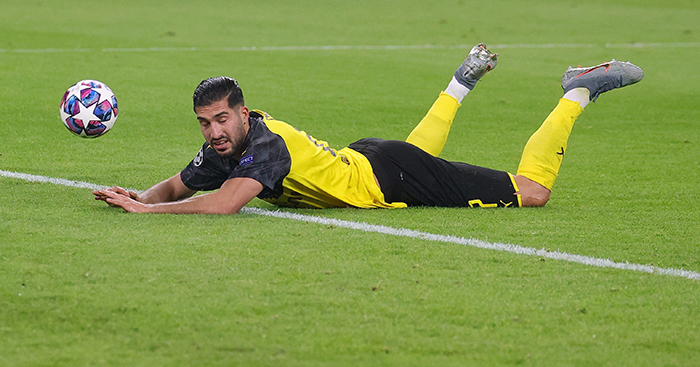 Football was very different three months ago. Instead of worrying about whether the season would finish, we were enjoying the race for the Premier League top four and wondering if Norwich had a great escape in them.

And the players themselves had very different priorities. With no indication they’d be stuck in their homes for months on end, many sought new clubs for the second half of the season.

Bruno Fernandes arrived to much fanfare. Christian Eriksen headed off to Italy. Danny Drinkwater, possessing the agility of a man who eats too many carbs, was passed around like a hot potato. And given we’re now in the midst of a global pandemic, here are 15 players who might be regretting their recent moves.

During his first few games for Dortmund, Emre Can put in some brilliant performances, even scoring a beaut on his debut.

Unfortunately, he took a pay cut to leave Juventus.

And since he would have been sitting on his arse one way or the other, he probably regrets not keeping his old contract till the summer.

Danny Rose to Newcastle made a lot of sense at the time. Short of playing time at Tottenham, the left-back saw an opportunity to get games under his belt.

And after Jetro Willems suffered a nasty injury on Tyneside, Rose was guaranteed a first-team place.

Of course, coronavirus has changed everything, and Mike Ashley is seemingly on the prowl for ways to save money via whatever means necessary.

Kenyan enforcer Victor Wanyama had played just 23 minutes in the Premier League this season, so his time at Spurs was clearly at an end.

A free transfer to Montreal Impact — managed by Thierry Henry — was certainly a curveball, but the move to MLS offered a fresh start.

The Canadian winter is shit at the best of times, but Wanyama’s has been brutal: he’s been running up and down the stairs in his apartment block in order to keep fit.

When Daniel Podence was given the chance to join Wolves for £17million, he would have seen the opportunity to play at a higher level alongside talented compatriots like Rui Patricio and Ruben Neves.

The future remains bright for the winger, but lockdown in the virus-stricken Midlands sounds a lot worse than chilling on the Greek coast.

Coronavirus didn’t actually affect Cenk Tosun’s loan to Crystal Palace, but the striker’s brief stint in London brought him one goal and a six-month ACL injury.

He’s now back at Everton, where nobody wants him.

This seemed like a terrible move even in happier times, what with Jose Mourinho dragging Spurs to oblivion and Jorge Mendes clearly just orchestrating the move for a laugh.

Here is Gedson looking sad in the gym:

Out of the frying pan and into the fire.

Yannick Carrasco probably thought a return to Atletico on loan from Dalian Professional was a sensible thing to do, given that

But the way things are going, the Chinese Super League is on course to return to action before La Liga, leaving the Belgian with huevo on his face.

Another mover from China to Europe, Odion Ighalo fulfilled a lifelong dream when he signed for Man United.

But that dream is becoming a bit of a nightmare.

Ighalo has scored some really good goals for United, but they could ultimately get erased from the history books if the season can’t be completed.

He also took a massive pay cut — to sit at home and do nothing.

Imagine being 18 years old and moving from Brazil to Watford. And not being allowed to go out. And only having Zoom chats with Heurelho Gomes to keep you sane.

Joao Pedro could be a big success in England, but he can’t be having a good time right now.

Look, he’s already gone mad and thinks he can fly:

What’s worse: being disliked by your own fans, or being stranded in the epicentre of the coronavirus crisis?

Ashley Young started his Inter career with some impressive performances, and if Serie A ever returns, he has a genuine shot at silverware.

Now, though? At least Brandon Williams can chat to his neighbours.

Pepe Reina’s loan to Aston Villa has been hilariously embarrassing, and since Begovic was effectively the makeweight for that move — assuming the coveted reserve keeper role at Milan — it should be triply embarrassing for him.

In early January, Roma legend Daniele De Rossi cut short his spell at Boca Juniors — and his career — to be reunited with his family.

Had he waited a bit longer, he could have snuck home on a plane and still got paid for it.

You have to feel sorry for Winston Reid. The New Zealand defender has been injured for about a decade, and now he’s refreshing his news feed in Kansas, of all places.

I can confirm that Winston Reid has just completed the documentation for his temporary transfer to Sporting Kansas City in the MLS. Good luck Winston. dg pic.twitter.com/qKiOLyDYVw

Yevhen Khacheridi, a six-foot-six centre-back with 51 caps for Ukraine, spent 2018–19 playing for PAOK in Greece but was unattached for the latter part of 2019.

Capitalising on the opportunity were Belarusian champions Dynamo Brest, who snapped up the giant in January 2020.

From vice-captain of Sevilla to poster boy for Keeping Calm and Carrying On?

It’s hard to tell what the fuck Daniel Carrico was thinking here, signing for Wuhan Zall long after the severity of the coronavirus was public knowledge.

Daniel Carriço given a round of applause at the end of his goodbye press conference in Sevilla. President Pepe Castro describes the Portuguese as a club legend 🇵🇹
pic.twitter.com/R1ykWb5FJz

The Wuhan squad were actually training in Spain through the worst of it, unable to return to China due to travel restrictions.

But they’ve gone back now, and Carrico thinks his decision has been vindicated.

“In Europe cases are increasing daily,” he said. “But in Wuhan less people are falling ill and there’s only a handful of new cases.”