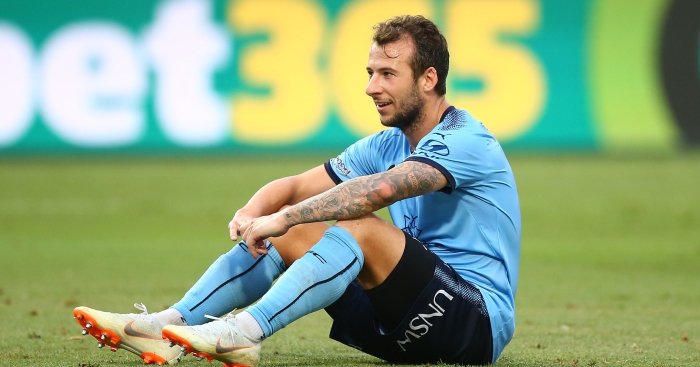 Even for the most ardent of Football Manager addicts, it’s easy for a player to go completely off your radar once they begin to drop down the divisions or move abroad.

Age supposedly catches up with us all, but then you see a random player from the past pop up on your Twitter feed and start to question whether it actually does or not.

We’ve taken a look at 15 players we can’t believe are still playing.

Once Arsenal’s record signing, Reyes went on to play for both Real and Atletico Madrid before settling down back at his first club, Sevilla, where he won three-consecutive Europa League titles having already won the competition twice with Atleti.

Since leaving Sevilla in 2016 the former Spain international has endured a turbulent few years. He spent a solitary season at Espanyol under Quique Sanchez Flores before dropping down a division with Córdoba after a six-month wait to find a club.

The forward lasted just four months with Córdoba before moving to China’s second tier with Xinjiang Tianshan Leopard, where he suffered relegation, prompting a return to Spain with third division side Extremadura, where he lines up alongside former Sevilla team-mate and Football Manager hero Diego Capel. He’s 35.

You remember him, the big sh*thouse of a centre-back who scored in the 2002 Champions League final for Bayer Leverkusen, lifted the World Cup with Brazil in the same year, and helped Inter to the Treble under Jose Mourinho.

At the age of 40, he’s still going ‘strong’ for Brasiliense in Brazil’s Serie D.

After spending six years of his career touring every club in London, Benayoun returned to his native Israel in 2014 and is currently onto his fifth move since, joining Beitar Jerusalem for a second time ahead of 2019 for what will be his final season before retiring.

Like many Italian strikers before him, notably Luca Toni, Borriello enjoyed one of his most prolific seasons in the twilight of his career, bagging 20 goals in all competitions for Cagliari in 2016-17, which represented the best return of his career.

But just two years later he moved to the Spanish lower leagues to join UD Ibiza, who are one of the emerging clubs moving up the pyramid.

Borriello endured an entirely forgettable loan spell at West Ham in 2014, which just so happened to coincide with Nocerino’s own temporary move to east London.

The midfielder spent five years at Milan as well as two spells at Juventus and was named in the Serie A Team of the Year in 2011-12 but now plies his trade in the second tier with Benevento after two seasons in MLS with Orlando City.

According to Sports Illustrated, Donovan is due to come out of retirement for a third time to play for the San Diego Sockers in the Major Arena Soccer League, an indoor football competition.

The USA legend initially retired in 2014, only to rejoin LA Galaxy for the end of the 2016 season. The forward then waited another two years before joining Mexican outfit León.

Despite playing for both Milan clubs and representing Italy at senior level, Pazzini’s career hasn’t panned out as expected after he scored a hat-trick for Italy’s Under-21s in the first game at the new Wembley stadium.

The striker has spent the last four years at Verona, although he joined Levante on loan for the second half of 2017-18, scoring his only goal for the club against Real Madrid.

Sunday's without 'calcio' are for looking up old videos like these of Giampaolo Pazzini scoring wonder-goals in the Champions League with @sampdoria_en.

We couldn’t quite believe our eyes when Diamanti stepped up to score the winning penalty against England at Euro 2012.

We can’t quite believe our eyes to see Diamanti is still going for Livorno in Serie B.

Le Tallec joined Liverpool alongside cousin Florent Sinama-Pongolle in 2001 and even started in their quarter-final clash with Juventus in their Champions League-winning campaign, despite spending the majority of his time at Anfield out on loan.

Since leaving Merseyside in 2008, Le Tallec returned to France, where he has remained apart from a two-year break in Greece and Romania, most recently joining second-tier Orléans in 2018.

Another former Liverpool man, this time from the Rafa Benitez years, Sissoko had a 10-year CV to match any player’s by moving from Valencia to Anfield to Juventus to PSG.

The second Invincible on this list, Hoyte made his Arsenal debut in a team which featured Ray Parlour and Giovanni van Bronckhorst – and Ryan Garry.

Having joined FC Cincinnati while they were still a second-tier side in the US, the right-back is in line to get a crack in MLS next season after the club were drafted into the competition as an expansion franchise.

We were big fans of Beasley when we were younger. Not particularly due to anything he did on the football field, although he was part of the tasty PSV side which reached the Champions League semi-finals, but because he has a really f*cking cool name.

Imagine having a player called DaMarcus. It would be ace, wouldn’t it? Houston Dynamo should count themselves lucky.

“I saw this an opportunity to branch out and sort of rebrand myself and reinvent myself on the other side of the world,” Le Fondre recently told Sky Sports having made the move to Sydney FC.

We just assumed he must have retired after a spell at someone like Southend.

Scotland’s equivalent to Jamie Cureton – who’s still scoring for Bishop’s Stortford, FYI –  after Miller was given a taste of management at Livingston, we just presumed that was it.

But he left Livingston after just seven weeks with the club wanting the former Scotland international to concentrate more on the managing rather than the playing in his player-manager role.

The 39-year-old was not quite ready to give up scoring goals so he instead joined Dundee, and has seven to his name in Scotland’s top flight this term.

Another 39-year-old playing in Scotland, people couldn’t quite believe Hughes was lining up for Northern Ireland at Euro 2016, and yet he’s still going Hearts.