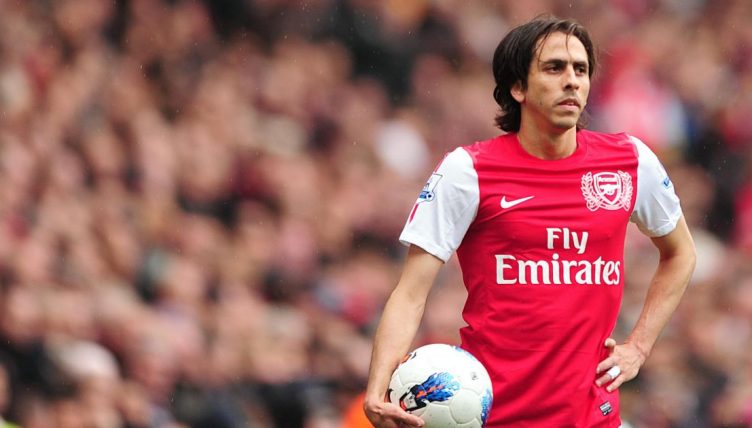 It can be tough to make the grade at Arsenal, but failing there doesn’t always mean you should write off your entire career.

Few other clubs have played the youth game so well, bringing through the best from across the world, so it’s natural for a few still-good players to slip through the net.

While the likes of Cesc Fabregas made the cut in north London, others had to get it done elsewhere. On the other end of the ‘wait, he was at Arsenal’ scale, of course, you have those senior players who had blink-and-you’ll-miss it spells at Highbury or the Emirates Stadium in between stints elsewhere.

Here, we look at 15 players that you’d probably forgotten played for the Gunners.

A striker with more than 50 Premier League games to his name, Afobe was the subject of a strange bit of business in 2018 when newly-promoted Wolves signed him from Bournemouth, only to loan (and eventually sell) him to Stoke without him playing a minute for the club in the interim.

Long before that, though, the Democratic Republic of Congo international was on Arsenal’s books, still holding out hope of a senior England call-up after playing his part in the run to European Under-17 glory in 2010 alongside the likes of Jack Butland and Ross Barkley.

It never happened for him at the Emirates, and he left in 2015 without playing a senior game.

We remember Benayoun’s spells at West Ham, Liverpool and Chelsea, but his stint at Arsenal is often forgotten.

Strangely, though, he played more games in one season at Arsenal than in one and a half with the Blues, from whom he was on loan.

Even his most important goal, in the 3-2 win over West Brom to secure Champions League qualification, came when most non-Arsenal fans were watching Manchester City snatch the title.

Bentley achieved plenty in his career, including winning a handful of England caps, but none of the good bits came at Arsenal (unless you count making his senior debut for the club).

There’s a sense that his entire time with the club was whitewashed by his arrival at neighbours Tottenham as one of their most expensive signings at the time, though the highlights came earlier.

An eye-catching spell on loan at Norwich made people think he might get a proper Premier League breakthrough, and he did… only it was at Blackburn rather than Arsenal.

Most of you will know Leon Britton spent almost his entire career at Swansea City, playing more than 500 games for the Welsh club.

Some will also remember the short stint at Sheffield United which he used to break his two Swans stints. A few will remember him beginning life in the West Ham academy. Fewer still will recall his time at Arsenal.

The midfielder was on the Gunners’ books until the age of 16 when West Ham paid a six-figure fee to coax him to East London. In another life, he might have stuck around and broken through ahead of Cesc Fabregas. Yeah, maybe not.

Diarra was there for a bit, we promise.

Signed from Chelsea and sold to Portsmouth, all in the space of six months, you can be forgiven for not noticing his presence.

The France international later spent time at Marseille, Real Madrid, Anzhi Makhachkala and PSG, in what will be remembered as a very confusing career.

Name us a more random career path than Lassana Diarra's:

When Freeman made his Premier League bow with Sheffield United, a few Arsenal fans probably thought his name sounded familiar.

That was because the set-piece maestro was picked up by Arsene Wenger shortly after making his Gillingham debut at the age of just 15.

While he never made the grade at the Emirates, he built his way back, showing good things come to those who wait.

Speaking of players who have needed to be patient, Gayle came through non-league after leaving Arsenal as a teenager.

The striker was down in the Essex Senior League with Stansted before finally making the step up to the football league at 21, and a couple of years later he was in the top-flight with Crystal Palace.

Speaking to Chronicle Live about his Arsenal rejection, Gayle said: “It made me more determined at the start as it was hard to take at a young age.

“I am sure a lot of people have experienced it. After a few years, you learn from it and makes you into a stronger person.”

After six years (six!) on the books at Newcastle, he’s now back in the Championship at Stoke.

Johnson was just 15 when Arsenal let him go, and like Gayle he moved into non-league football.

He worked his way up the pyramid one division at a time, playing in League Two, then League One, then the Championship and eventually the Premier League, where he racked up exactly 100 top-flight games for Norwich City.

He’s now working his way back down. Having spent a total of seven years in the Championship with Derby and Blackburn, he joined League One MK Dons in 2022.

Kane wasn’t at Arenal for long, playing for the club’s underage teams before he’d hit puberty, but he may still be the highest on their ‘one who got away’ stakes.

If his achievements for Spurs weren’t painful enough on their own, we can then add in his specific record against Arsenal.

However, before the future Turkey international was signed by the Seagulls using the proceeds of a competition run by the soft drinks giant, he was on Arsenal’s books as a teenager, only to leave for Bury after being released aged 15.

Since then, the much-travelled player has had spells in Turkey, France, Greece, the Netherlands, Scotland, Brazil and Mexico, and most recently he’s returned to Turkey to play for Fatih Karagumruk – who are managed by Andrea Pirlo – after a spell with Derby in the Championship.

Larsson played more than 250 times in the Premier League, but just three of those appearances came in an Arsenal shirt.

The Swede came through the Gunners’ youth setup at a particularly competitive time but did at least get on the pitch a few times.

The most famous of his appearances was also his debut, replacing Sol Campbell when the defender went AWOL at half-time during a defeat to West Ham in 2006.

Larsson started the next two games, too, against Birmingham and Bolton, before joining the former on a permanent basis over the summer and working his way up to the status of ‘Premier League midfielder who’s just always there’.

A midfield partner of Larsson at Highbury, Muamba would go on to join his colleague at St Andrew’s on loan before joining permanently in 2007.

He played just two League Cup games for the Gunners, partnering Larsson against Sunderland and Mathieu Flamini against Reading, but would end up playing more than 150 times in the Premier League for Birmingham and Bolton.

Sadly for the England Under-21 international, heart problems forced him into early retirement at just 24.

Arsenal moved mountains to sign Nordtveit after he made his professional debut at 16, but the Norwegian never made an appearance for the first team.

That’s not to say he hasn’t had an accomplished career: most of his 206 Bundesliga appearances came at Borussia Monchengladbach (where he was a team-mate of Granit Xhaka), and he played in the Champions League for both them and Hoffenheim.

If you thought his name sounded familiar during Premier League spells with West Ham and Fulham, now you know why. On reflection, though, you might have missed those too.

We knew Arsenal have had Stewart Robson and Nwankwo Kanu on their books, but Hal Robson-Kanu – not a hybrid of the two – had a far less memorable spell in north London.

The London-born winger was a Gunner until the age of 15, a contemporary of the likes of Henri Lansbury, but was farmed off to Reading long before getting near the senior team.

More than 50 Premier League games for Reading and West Brom showed little to indicate Arsenal had erred, but few ex-Gunners have scored a goal as good as Robson-Kanu’s for Wales against Belgium at Euro 2016.

Part of Arsenal’s 2001 FA Youth Cup winning squad along with luminaries such as Moritz Volz and Jeremie Aliadiere, Sidwell saw his path to the first-team blocked and opted to join Reading in 2003.

He was much more successful for the Royals, helping them into the Premier League and later earning himself a move to Chelsea, where he infamously took the No.9 shirt.

The midfielder retired in 2018 after helping Brighton climb up to the Premier League.

READ NEXT: 15 Arsenal signings who were meant to be the business… but weren’t