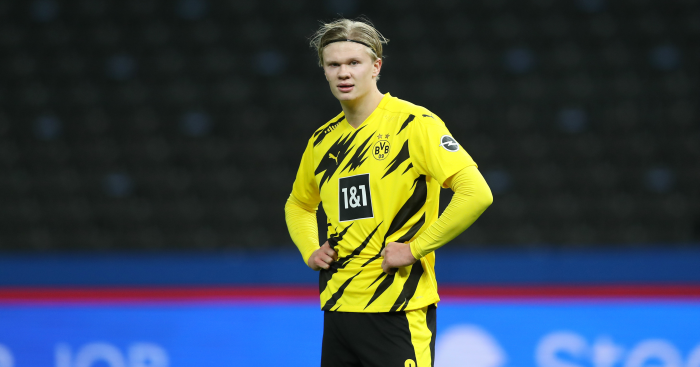 While Tottenham and Liverpool stole the headlines in the Premier League this weekend, plenty of exciting action took place around as elite club football returned.

Erling Haaland continued to make goalscoring look ridiculously easy, the Bundesliga gave us one of the greatest own goals of recent times and an epic penalty shootout unfolded in the MLS.

On the day he was crowned Golden Boy winner for 2020, Erling Haaland scored FOUR goals in Dortmund's win over Hertha Berlin 😳

Are Kane* and Son the pair to lead Tottenham to the title?

Harry Kane has provided the most Premier League assists this season (9).

Heung-Min Son has scored the most Premier League goals this season (9).

Spurs are on cloud nine. 🤩 pic.twitter.com/NAnLShZik5

Not a bad response to conceding six goals with Germany.

You shall not pass 🙅‍♂️❌

Manuel Neuer pulled off this phenomenal double save for Bayern earlier 🤯 pic.twitter.com/oqAsIXruQN

The goalkeeper doesn’t even move.

He never did this for Manchester United or Arsenal.

Own goal of the century by Bayer Leverkusen goalkeeper Lukas Hradeckypic.twitter.com/tvmxzzIaCc

Not a bad way to score your first goal in over four years.

Lewis Cook's first goal for Bournemouth is an absolute peach! 🍑 Not only that, it also completes Bournemouth's comeback, having been two goals down at half-time.

A bullet from League Two.

Goal of the day…🚀

MLS in all its glory.

After going up in a penalty shootout, Orlando’s GK got a red card, which meant they had to put their backup left back in goal..

..who then made this save that led to Orlando winning their first ever playoff game.

Catania coach Giuseppe Raffaele gets a four-match ban in Serie C after the 2-1 win over Vibonese, for tackling an opposition player about to counter-attack deep in added-time pic.twitter.com/VlELo7jR7r

Why are finishes with the outside of the foot so much nicer?

Wait for the slow-mo… pic.twitter.com/aZ3KmlxQO0

We wholeheartedly endorse this.

If a team take a corner and end up going all the way back to their own keeper, the ref should gather them together and say 'I can't actually penalise that but don't do it again; it was so depressing'.

*Buy Harry Kane and thousands of other players on Football Index. 18+, UK and Ireland customers only, begambleaware.org. T&Cs apply.