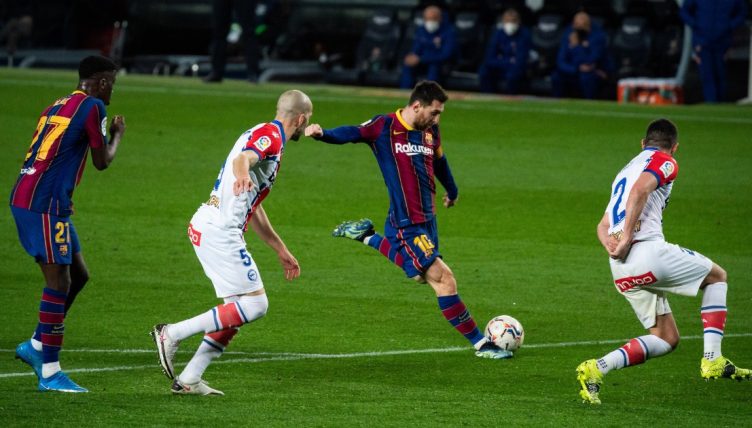 Liverpool‘s crumbling title defence led the news in England this weekend, while Romelu Lukaku stole the show for Inter in Serie A.

Elsewhere, Lionel Messi continues to do Lionel Messi things for Barcelona, despite his future remaining unclear, while we were treated to one of the longest long throws we’ve ever seen. Seriously, what more could you want?

The striker brought up 300 career goals in Inter’s 3-1 win over Lazio, but this assist took the biscuit.

Inter with the perfect response to Lazio's goal! 👏

A deadly counter attack and Lautaro Martinez makes it 3-1 🔥 pic.twitter.com/fYBfRmsmA8

Roy Keane has joined Instagram and posted his first selfie.

This is not a drill. pic.twitter.com/XC2UiQAnh0

Another day, another Messi stunner.

A rocket from Barca's No. 10 as he puts on a vintage performance against Alaves 🚀 pic.twitter.com/0TCLr6bFnm

We had to double-check that this is the same Borini that played for Liverpool.

Save of the season?

Jamie Vardy played the corner flag like a guitar 🎸🎶 pic.twitter.com/oPejoQBgXA

We’re never going to forgive Pep Guardiola if he doesn’t let Ederson take a penalty before the end of the season.

Ederson really wanted to take that penalty, but @BernardoCSilva stopped him. 😭😂 pic.twitter.com/RGdmsLQlEn

Ilkay Gundogan is the highest scorer in the Premier League so far in 2021 with 9⃣ goals in 9⃣ games 🤩#MCITOT pic.twitter.com/uBRlY0zvra

This takes us back to our French GCSE exam.

When Blaise Matuidi couldn't find a photo of his wife on Valentine's Day, so he googled 'matuidi wife' 😂 pic.twitter.com/H5iriT3Jjv

A lovely counter-attack from Dortmund 👏

The cheekiest of cheeky nutmegs.

On this photo, Sérgio Conceição is celebrating Porto's championship title win with his kids in 2004.

The youngest son, Francisco Conceição, 1-year-old toddler at the time, has been given his Porto debut tonight by his father, the coach Sérgio Conceição. pic.twitter.com/WVauacUAmP