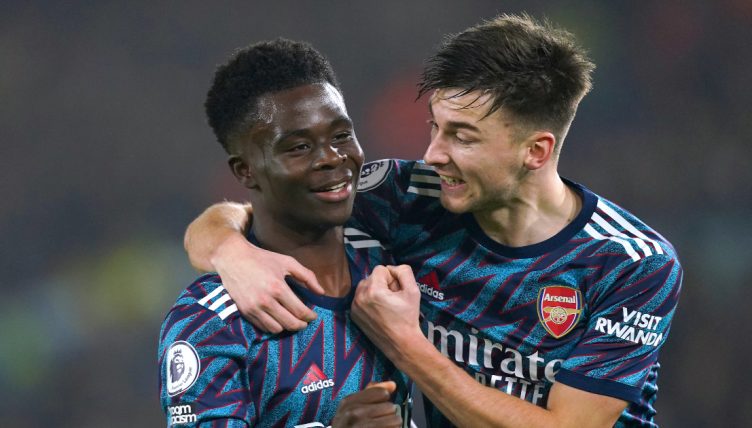 After several Premier League games were postponed, Liverpool’s 2-2 draw with Tottenham helped provide the entertainment at the weekend.

Elsewhere, Barcelona’s young players starred in a 3-2 win over Elche and Celtic came from behind to beat Hibernian in the Scottish League Cup final.

Audio from Jurgen Klopp's confrontation with referee Paul Tierney after the game pic.twitter.com/jkcx4slwRk

The Leeds defenders have had a bad week and Saka had to go and make it even worse.

Bowling and a quick pint must be the key to great goalscoring form.

⁦@gabimartinelli⁩ be on fire since I took him Bowling 🙌 told ya a quick pint is cool 😜🍻 pic.twitter.com/Q4Dn2rSr19

Look at the date. Milner can quite clearly see into the future.

Tough away trip in difficult times, but we keep pushing 👊🔴 #YNWA pic.twitter.com/sPMW39bx8u

19 – Tyler Morton is today making his first Premier League start for Liverpool. He is starting in midfield alongside James Milner, who made his Premier League debut in November 2002 for Leeds United, 10 days after Morton was born. Tutelage.

Not a bad way to score your first Barcelona goal.

Isak is definitely getting snapped up by one of Europe’s biggest clubs in 2022.

It's no wonder Alexander Isak is attracting so much attention 👀

Pure class from the Swedish 22-year-old for Real Sociedad! pic.twitter.com/1AaymxF8uI

Williams caught everybody by surprise with this strike.

AMAZING strike from the angle from Inaki Williams! 💥

The Fiorentina striker has been the breakout star of 2021.

We have a superstar on our hands my friends pic.twitter.com/8JMivIIZRB

The movement on this free-kick is just ridiculous.

Stepped up, and absolutely leathered it 😲

The technique on that! 👏 pic.twitter.com/aiWpJp3ysA

Oh my word, what a finish that is from @CelticFC's talisman! 🔥

Ange Postecoglou's side have come from behind to lead 2-1 🍀 pic.twitter.com/08fs4b4ClP

An outrageous pass. Why didn’t he do this at Liverpool?

Is there anything more entertaining than a really shit solo goal?

Tammy Abraham gets the ball in the 1st minute of the match, takes on 5 Atalanta players, leaves them all behind and scores.

Well, this cheered us up a bit.

I have debated long and hard about putting this video on this platform, but you know what? People need to hear something nice.

I give you my tale of Roy Keane and the Christmas Miracle.