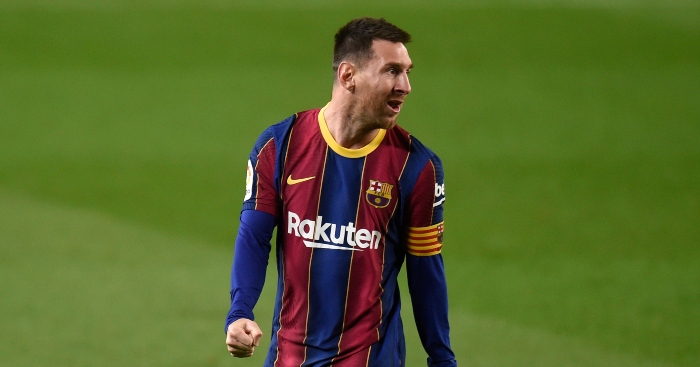 After being criticised in recent weeks, Liverpool and Mo Salah were at their scintillating best during the 3-1 win over West Ham at the weekend.

21 – Mo Salah is the first player to score 20+ goals in all competitions in four consecutive seasons for Liverpool since Ian Rush did so six times running from 1981-82 to 1986-87. King. pic.twitter.com/JfqMJSluVc

It’s hard to believe that they were arguing a few seconds earlier.

Mendy made more dummies than saves against Burnley.

Gary Neville whispering to Martin Tyler reminding him that David Luis and Cavani played at PSG together pic.twitter.com/7uBUceCOEy

A brilliant way to introduce yourself to the Manchester United fans.

Amad Diallo pulls off a Panenka penalty to make it 6-2 to United 😮 pic.twitter.com/LpYov3EauL

Spare a though for the defender trying to run back onto the line.

MAJESTIC free kick from Lionel Messi for his 650th goal! 😍

Worth every penny, right? 😉🤑 pic.twitter.com/8ck8D1eOyY

Bit dusty in here, isn’t it? They won the league title in the most incredible way, too.

Last night, Alan Ruschel – a survivor of the 2016 Chapecoense plane crash that killed 71 of the 77 people on board – lifted the Brasileiro Série B title as Chapecoense captain. pic.twitter.com/lRjM9OjD0x

Scoring the winner with their first shot on target in the ninth minute of injury time is peak sh*thousery.

🇧🇷⚽🏆 Breno comes off the bench to score a late header to win the #Libertadores for #Palmeiras! pic.twitter.com/9NRap7T5ZG

We’ve spent most of the morning watching this on repeat.

Dani Parejo with a ROCKET! 🚀

Unbelievable hit from the Villarreal midfielder 💥

"Just unreal how cleanly he hit that!" 🗣 pic.twitter.com/Nw1OuazpzR

This rubbed salt into PSG’s wounds after a late winner.

Lorient players doing the Haaland celebration vs PSG that they did against Dortmund is top tier shithousery pic.twitter.com/0mZ7DdRI5J

Wow…what a PERFECT free kick from a long way out by Luis Suarez! 🎯

The pitch has an incredible first touch.

That’s one way to keep warm.

The Ajax subs seem to be keeping warm by enjoying their own personal Sports Day 😂 pic.twitter.com/jRy13tKrQd

You won’t be surprised to find out that this game was eventually abandoned.

We’ve got no idea how he’s hit that so well while falling backwards.

On the slide from @DevanteRodney! 😎

A superb finish from Dave helps @OfficialPVFC on their way to a 5-1 win. #EFL | #SkyBetLeagueTwo pic.twitter.com/uCfY6lOGDM