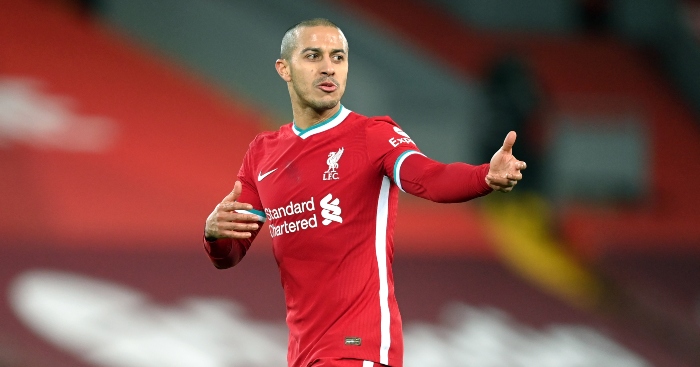 While Liverpool‘s eagerly-anticipated clash against Manchester United failed to live up to expectations, there was still plenty of exciting action around the world this weekend.

Kevin de Bruyne reached another significant milestone in his Manchester City career and Lorenzo Insigne provided one of the assists of the season.

Not a bad way to score the winner against Barcelona in the Spanish Super Cup final.

OMG IÑAKI WILLIAMS HAS JUST DONE AN ABSOLUTE MADNESS IN THE SUPERCOPA.pic.twitter.com/bMCUPG9vep

After scoring the equaliser to take the game to extra-time, Villalibre then led Bilbao’s celebrations by playing the trumpet.

Then he brought out his trumpet 🎺

The celebration was even better than the finish.

What a finish from James Maddison 👏

He smashes it into the roof of the net to put Leicester in the lead and follows it up with some socially distant celebrations! pic.twitter.com/7QCQ42RvWB

While we’re on the subject of celebrations…

I can’t get over these passes.. pic.twitter.com/s27KoGoxpx

100 – Kevin De Bruyne has now assisted 100 goals in all competitions for Manchester City, 31 more than any other Premier League player since making his debut for the club. Royalty. pic.twitter.com/QAs70G77oz

The midfielder made his long-awaited Anfield debut for Liverpool and certainly didn’t disappoint.

Controlled the game on his home debut 💫 pic.twitter.com/6iSL4MD5sM

One of the few highlights from a very cagey game between Liverpool and United.

We’ve said it before and we’ll say it again. Get these two their own TV show.

There was no stopping that strike.

This could very well be the best goal in the Bundesliga all season! 🔥

The skill in the build up! A wonderful run! 💫 pic.twitter.com/laJBQgN6T9

Diego Maradona would’ve been proud of this assist from the Napoli forward.

Absolute GENIUS from Insigne to set up Lozano! 🙌

Napoli are 3-0 up and absolutely rampant now 🔥 pic.twitter.com/3QzqSPbAKc

Robert Lewandowski will get the headlines but this goal is all about Muller’s assist.

It was snowing in Istanbul during the Basaksehir – Sivasspor game and Sivasspor thought wearing white would be a good idea. Yes, there are actually two sides in this photo – look closely and Sivasspor players are there. 💆🏻‍♂️💆🏻‍♂️💆🏻‍♂️ pic.twitter.com/LBV1Zi14Fp

Jovic has rediscovered his shooting boots since leaving Real Madrid and returning to Eintracht Frankfurt.

A thunderous finish to mark his return to Eintracht Frankfurt! 👏 pic.twitter.com/QlBzZJ7lM7

Good to see Phil Jones getting on well in Belgium.

Players have been given the England captaincy for less. pic.twitter.com/rFi4OgI3Z9