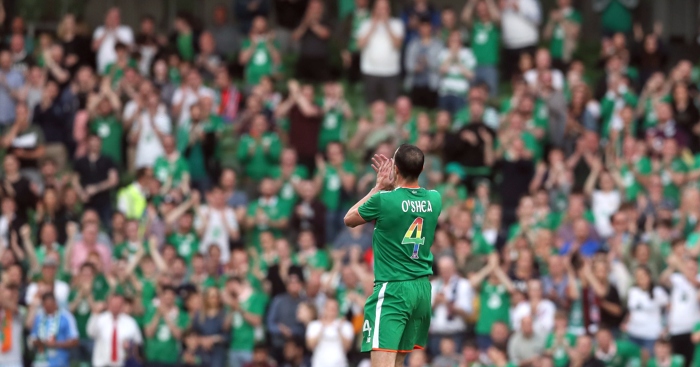 As countries around the world get ready for Russia, Chelsea, Tottenham, Barcelona and Real Madrid men all caught our eye.

With less than two weeks until the World Cup begins, there were a raft of friendlies over the weekend, with wins for the likes of England and France, but a defeat for Germany, and a draw between Belgium, who feature in England’s group, and Portugal.

Here are some of the highlights from an action-packed weekend.

For their friendly this weekend, both sides announced the shirt numbers would bear the rainbow flag, in support of LGBT rights.

The back of tomorrow’s match kit. Not just a number, this is a statement. Ireland, supporting #LGBT rights. 🏳️‍🌈🇮🇪 #EqualGame #COYBIG #COYGIG #IRLUSA pic.twitter.com/Becg6ki0VW

In Austria’s first win over Germany in 32 years, the defender scored this belter.

This World Cup advert might be the best yet.

Been a lot of incredible world cup commercials adding to the pre world cup euphoria, but none better than this.
The desire, the near misses and Messi.
For me this ad epitomises why Argentina is THE story of the World Cup – get pumped guys, it's only round the corner now… pic.twitter.com/1iOKcTEvDP

Burke showed what had Leipzig paying £13million for him in Scotland’s Under-21 match against South Korea.

Vertonghen won his 100th cap in Belgium’s friendly against Portugal this weekend, and was presented with the cap by a surprise guest, his mum.

And this is a pretty good stat.

Incredibly proud to play for my country. Thanks for all the support on this journey. Bring on the @FIFAWorldCup 🙌🏻 💯#RedTogether pic.twitter.com/RJADsVX6fh

The India captain sent out this heartfelt message in an attempt to get more support for the national team.

This is nothing but a small plea from me to you. Take out a little time and give me a listen. pic.twitter.com/fcOA3qPH8i

What a header. We’re gonna win the World Cup.

A totally random stat, but we love it.

Toni Kroos: Of those to have attempted 150+ long balls, @ToniKroos had the best long ball accuracy in Europe's top 5 leagues last season (87.9%)

Another good stat: by scoring against USA, former Aston Villa forward Burke became the first League of Ireland player to score for Ireland in 40 years.

Graham Burke becomes the first LOI player to score for Ireland since Shamrock Rovers' Ray Treacy in a 4-2 win over Turkey at Lansdowne Road in April 1978. He scored twice and missed a penalty. Rovers clubmate John Giles had scored the opening goal as wellhttps://t.co/eyTUaov4mH

All six games in Group G will be 'reds' vs. 'whites' (only the 2nd bicolour group in WC history).

England's blue shorts are stopping it from being a group of purely red or white kits – socks, shorts and shirts.

11 – 11 of @England's last 15 goals have been scored or assisted by @SpursOfficial players. Spursy. pic.twitter.com/prUV7aRkti

Brilliant save by Neuer! pic.twitter.com/xKc44tTnv6

O’Shea played for his nation for the final time against USA. A legend.

On 33 minutes, John O'Shea exits the pitch to a tremendous ovation.

Watch: Chaos in MLS as Philadelphia Union have two players sent off in 30 seconds